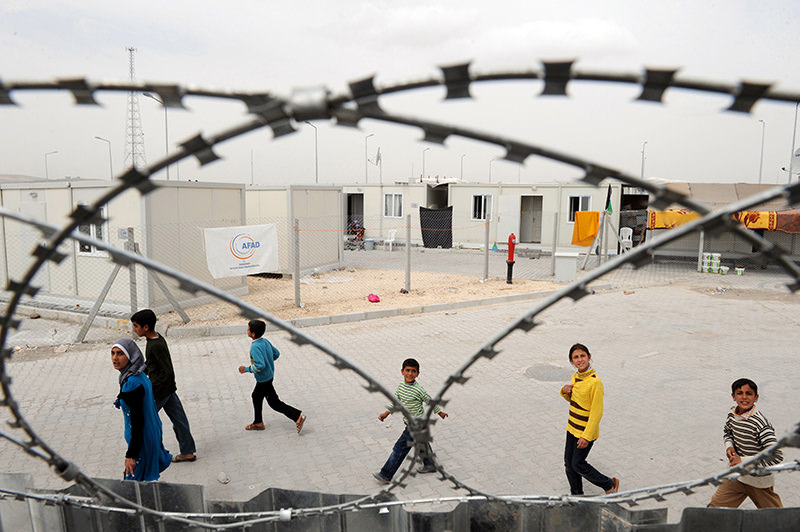 Whether to become a doctor, a chemist, an engineer or a banker, they have but higher education to fulfill these goals and hope to one day help their families and perhaps even their war-torn country.

Many Syrian youths who currently live in the container city of Harran district of Turkey's southeastern Şanlıurfa province, have seen their dreams shattered by a civil war that began in March 2011 and has since claimed more than 211,000 lives and destroyed thousands of homes.

But some have managed to resurrect these dreams by enrolling in a university in a foreign country that they now call their "second country."

Neced Sallum, 20, is one of these fortunate youths, she says. A determined young woman, she fled the northwestern city of Idlib three years ago with her mother and father.

"I always wanted to visit Turkey, which I saw in TV series," she says. "We are here right now, not to visit, but because of the war."

The first step in gaining access to higher education for Syrians in Turkey begins with learning the language and finishing high school.

Neced wasted no time in learning Turkish and finishing high school upon arrival in the container city. She then proceeded to enroll in the nursing department at Harran University in Şanlıurfa last year.

In order to study a university in Turkey, foreigners, including Syrians, need to pass a special exam, which is held in both Turkish and English.

"The first days of university were hard for me. Everything was different: Friends, atmosphere and language. But with each passing day, I started getting used to the school," Neced says.

Despite all difficulties, she has completed the first year successfully. "Fortunately, I made it."

Another first-year university student, Geyda Kehlavi, 19, who lives in the same container city and studying economics at the same university, experienced the similar difficulties.

"As I had difficulties in the first days at the university, I thought of dropping out because of bad grades that I got," she recalls. "Then, I started getting better grades and regained my motivation."

She now never wants to drop out.

Syrian students in Turkey are exempt from paying university fees.

"I think we are lucky, as the conditions here are good. Some Syrians are sleeping on the streets unfortunately," Hallum Assallum, 21, who is studying food engineering at Harran University.

There are six container cities established for Syrians in Turkey, where the conditions are relatively better than the tent cities. The Harran container city hosts around 15,000 Syrians.

Some 35 people from the container city have enrolled at the university so far.

"At first, I was afraid of not being successful but I made it and got the necessary grades to go to university," Geyda notes.

"I am generally studying hard. Especially, during the exam week, I am studying so hard," adds Hallum, who wants to be a chemist.

Naturally, families are proud of their children's success, achieved under diificult circumstances, against the backdrop of a war they have witnessed but must try to put behind them in order to move on.

Kemal Kehlavi, 46, who sells various bags and purses in the camp, says he is very glad that his daughter Geyda studies. "Of course, all of my children are valuable for me but I attach a different importance to Geyda as she is a girl," he states.

"Actually, we wanted her to study medicine but conditions changed [that]. Again, we are very happy that her education continues here," Kehlavi adds: "I will do my best to make her complete her education."

Education is not only a means to a better future for these youths; it is also a way to hope for their country's renaissance, to hope to contribute to the eventual rebuilding process.

"We would have one thing with us when we return back to our country: It is our education. We will rebuild Syria thanks to this education," Neced says stalwartly.

"Our Syria needs us. If we are weak when we return back to our country, we cannot rebuild and cannot help our country. So, we need to be strong and educated," agrees Hallum says, "Frankly, I am studying to realize this."
Last Update: Jun 23, 2015 12:38 pm
RELATED TOPICS