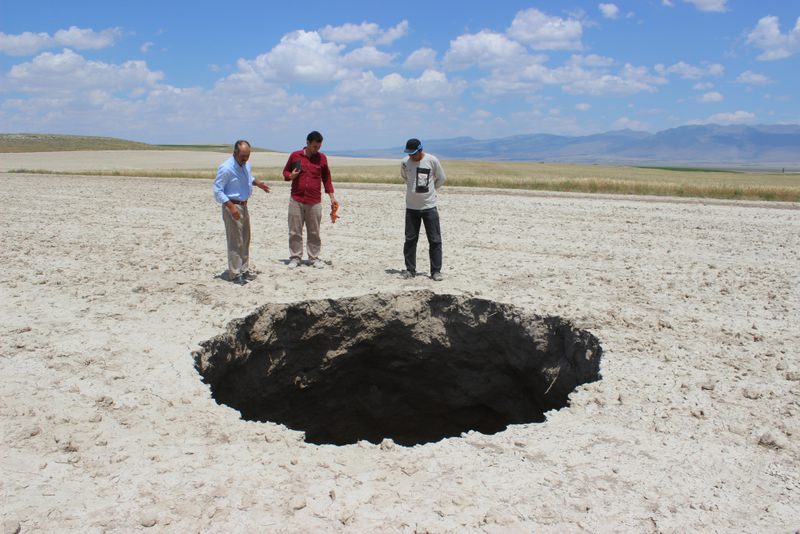 by Anadolu Agency Jun 25, 2015 12:00 am
Karapınar, a town of some 48,000 people in the central province of Konya, was once known for its desert-like landscape dotted with countless dunes that rain dust on the town in bad weather. Now it faces another threat, this time from underground in the form of sinkholes.

Nine sinkholes, with some reaching 70-meters in depth, have emerged over the past three months in the town. Although they were not in residential areas, locals live in fear that a massive sinkhole could devour buildings.

Mustafa Dirican, a farmer living in the Seyit Hacı plateau near the town said sinkholes although smaller in scale, have been common in the area since 1997, but their size has considerably increased in the past two years, during which 12 sinkholes have emerged. Dirican says the figure may be higher, as some landowners do not report sinkholes in their fields so that they are not closed to use for agriculture. Fences blocking access to the areas where sinkholes occur are already erected, but the risk of new sinkholes continues. Dirican and others are members of a 300-strong community of farmers living on the plateau. "I don't know what to do. We alerted authorities. They sent experts and drilled the ground to study it. That was all they've done, but sinkholes still happen," he explained. He said that they live in constant fear, scared of walking alone. Mustafa İvriz, another local, said they were afraid of working in the fields because of the possibility of a sinkhole. İvriz witnessed the emergence of small sinkholes last week on his way to the field. "But we have to work," he said.

Experts link over 200 sinkholes in the region outside Karapınar to recent downpours. Turkey, in general, has been affected by rainfall in the past month unlike previous years that were relatively warmer.

Fethullah Arık, an associate professor of geology from Selçuk University in Konya, said the geological structure of the region and heavy rainfall this year has contributed to the increase in sinkholes. "Prediction of their time and place is not possible," he said.

The latest sinkhole in Karapınar was last week, where a 20-meter-wide and 6-meter-deep sinkhole appeared in a field.
Last Update: Jun 25, 2015 9:51 pm
RELATED TOPICS