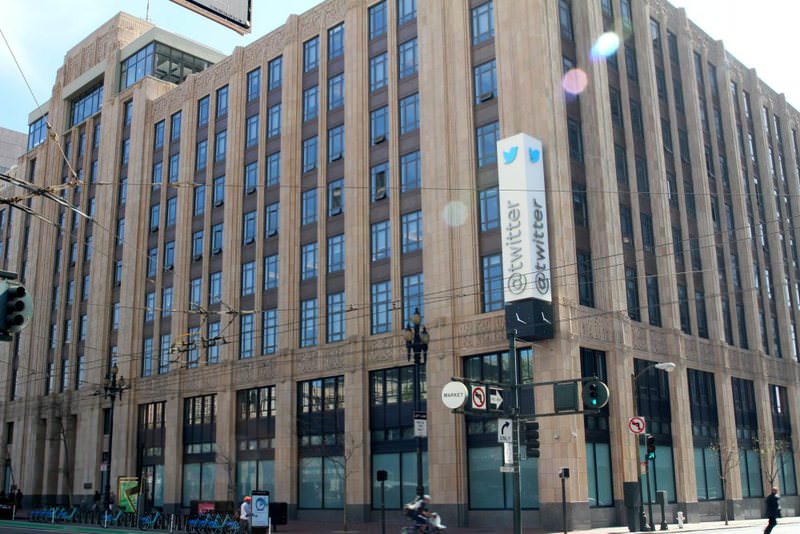 Twitter headquarters in San Francisco, California. Twitter has offices in 18 cities around the world, but it has no plans to open one in Istanbul.
by Daily Sabah Jun 25, 2015 12:00 am

Often at odds with Turkish authorities over its refusal to remove content deemed illegal in Turkey, Twitter appointed a coordinator for Turkey while ignoring calls by Ankara to set up an office in the country

Facing constant challenges to its content deemed illegal by Turkish courts, Twitter has appointed a new country coordinator. Emine Etili was revealed to be the social media website's public policy manager yesterday. She was accompanying Sinead McSweeney, the social network's public policy manager for Europe, the Middle East and Africa, in a visit to Turkey where Twitter officials held talks with officials from Internet service providers and state-run Telecommunications Authority (TİB).

Twitter had placed an online ad for the position in August 2014. Etili works at the Dublin office of the social media company.

The company was previously represented by a lawyer in communication with Turkish officials on legal issues.

The social network is usually at loggerheads with Ankara on the removal of content on the orders of Turkish courts.

In April, Twitter representatives met with Turkish officials over a dispute that saw a court ban on the website for days. Twitter consented to close accounts for which the court ordered the blanket ban on the website. Turkey was criticized for the ban on the website but the government cites a separation of powers and points that it was the judiciary that imposed the ban under the laws. Authority is vested in the courts that can order the closure of websites after complaints by the public on the grounds that they spread terrorist propaganda, insults, defamation, violation of personal rights and privacy and other wrongdoings punishable under the laws.

Sinead McSweeney said in a meeting with journalists on Wednesday that Twitter was against violent and abusive tweets and asked the public to report accounts that send those tweets to the company. Twitter, along with YouTube, was blocked two months ago after both sites failed to comply with a court order to remove images of a prosecutor taken hostage by terrorists in Istanbul. Sites were reopened hours later after they removed the content showing terrorists pointing a gun to the head of a prosecutor who was later killed against the backdrop of the flag of a terrorist organization.

Another point of contention for Twitter, as well as other websites, is taxes. Twitter avoided setting up a permanent representative office in Turkey, allegedly to avoid paying taxes in the country. The government estimates that Twitter generates $35 million a year in advertising revenue in Turkey, none of which is taxed locally. Turkish media reported recently that amendments in the Tax Procedure Law enabled companies without physical presence in the country to pay taxes for online revenues they reaped in the country.
Last Update: Jun 25, 2015 8:15 pm
RELATED TOPICS