UN: Unjust to leave Turkey alone to deal with refugees 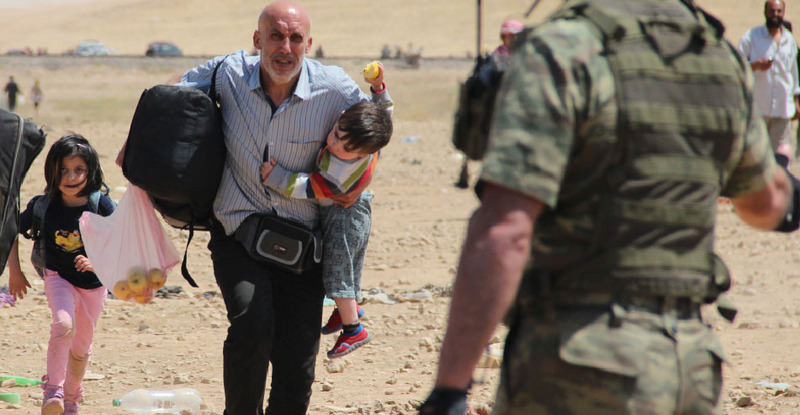 by Anadolu Agency Jun 25, 2015 12:00 am
It was unjust for the international community to expect Turkey to face the arrival of refugees on its own, U.N. Undersecretary-General for Political Affairs Jeffrey Feltman has said. Feltman, giving a briefing on Wednesday on the Middle East, said that about 25,000 Syrians had recently sought refuge in Turkey during efforts to remove the Islamic State of Iraq and al-Sham (ISIS) from Tal Abyad in Syria.

He added that at least 2,000 refugees had reportedly returned to Syria. "It is neither just nor possible to expect Turkey to continue to face the refugee pressures alone," he said. Feltman also announced that the U.N. Office of the High Commissioner for Human Rights (OHCHR) had begun investigating claims of displacement of Arabs and Turkmen.

Syrian Turkmen and Arab residents of Tal Abyad have accused the military wing of the Syrian Kurdish Democratic Union Party (PYD), the People's Protection Units (YPG), of mistreatment. They have claimed that the PYD was trying to influence demographics in the region, aiming to establish a Kurdish state by forcing Arab Syrians to migrate to Turkey.

In the past few weeks, Turkey has been witnessing massive inflows of Syrian refugees from Tal Abyad and nearby areas who fled clashes between ISIS and the YPG. The Syrian border city was captured from ISIS on June 15 by the YPG with the help from U.S.-led coalition airstrikes in northeastern Syria to push back ISIS forces. Turkey, which shares a 900-kilometer border with Syria, has given refuge to more than 1.7 million Syrians, according to the U.N. High Commissioner for Refugees, with more people coming in because of ongoing bloodshed in the war-torn country.A total of 23,349 refugees, mainly Arabs and Turkmens, fleeing clashes in Tal Abyad have entered Turkey's Şanliurfa province through the Akçakale border crossing since June 3, Foreign Ministry spokesman Tanju Bilgiç said in a press briefing last week.

Apart from pursuing an open-door policy for Syrian refugees fleeing fighting in their country, Turkey also participates in an effort to train and equip moderate Syrian opposition forces as part of the U.S.-led coalition's drive to battle ISIS.

Ankara has repeatedly maintained that it will continue to resolutely fight against ISIS. It has strongly rejected claims that Turkey sent weapons and fighters to ISIS in efforts to weaken Syrian President Bashar Assad. Bilgiç recently called the allegations slanderous.

Turkey's contribution in hosting refugees fleeing conflict in the region has been praised by numerous actors including the U.N. High Commissioner on Refugees Antonio Guterres and U.N. High Commissioner for Refugees (UNHCR) Goodwill Ambassador Angelina Jolie during their visit to a refugee camp located in Southeastern Turkey on World Refugee Day last week.

Speaking at the World Refugee Day press conference, Guterres stated that "Turkey is a great example for other countries in a world where borders are becoming unpassable for refugees," adding that the UN Security Council is, 'unfortunately not functioning effectively,' and emphasized that Turkey has helped refugees with very little assistance from other countries.
Last Update: Jun 25, 2015 7:40 pm
RELATED TOPICS