The security camera footage above shows that the pick-up truck filled with explosives approached from inside the Syrian town, contrary to allegations that it arrived from Turkey. 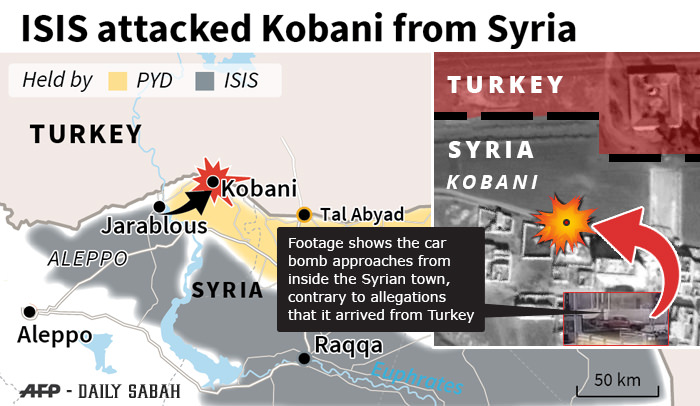 Some international media outlets, including Reuters and BBC, claimed that the self-proclaimed Islamic State of Iraq and Sham (ISIS) militants that detonated multiple car bombs in the northern Syrian town of Kobani on Thursday claiming numerous lives, had entered the Syrian town through Turkey's Mürşitpınar border crossing in the Suruç district of the southeastern Şanlıurfa province. However, such claims were strongly denied later throughout the day by Turkish officials.


This footage, taken from Turkish side of the border, shows the locations of containers, bus stops and the welcome sign seen in the first footage.


YPG spokesman Redur Khalil also made a statement regarding the incident saying that they are not accusing Turkey for playing a part in the attack. "We haven't officially accused Turkey. The ISIS militants entered the town [Kobani] through the west and the south." stated Halil.

Giving details about how the attack was carried out Khalil said that "The ISIS militants detonated a vehicle filled with explosives after they entered the town. Then the clashes with the YPG forces began. Some of the attacking ISIS militants were killed but three managed to escape. Another group of militants is currently under siege."

Turkey's state-run Anadolu Agency released two video footages that clearly refuted the allegations. The video shows that the car bomber in Kobani approached from the Syrian side, contrary to media allegations that it entered from Turkey.

The footage shows the pick-up truck filled with explosives did not come from Turkey and was in Syria prior to the bomb detonating. Turkey's Foreign Ministry strongly denied allegations that ISIS militants had come from Turkey, describing the claims as "lies".

ISIS militants detonated a car at around 5 a.m. in the town of Kobani, according to a statement released by the Şanlıurfa province governor.

Indicating that the allegations that ISIS militants entered Syria through the Turkish border were untrue, the official statement said, evidence showed the militants were already in the Syrian town of Jarablus when they entered into Kobani.

Earlier on Thursday, several Twitter accounts accused Turkey and its government on helping ISIS militants cross into Kobani from the Turkish side of the border, setting a falsified basis for biased reports published on various media outlets, including the BCC and Reuters.

The Syrian Arab News Agency (SANA), the official agency of the Assad regime which lost control of the area more than 3 years ago, also reported that its "sources" infiltrated into Kobani from Turkey, a report also aired by Syrian state television. This report somehow managed to set a basis for Reuters.


In the first tweet posted on the attack, the user claims that the suicide attack of ISIS "dogs" was conducted over Turkey, and there were many "martyrs" and injured.