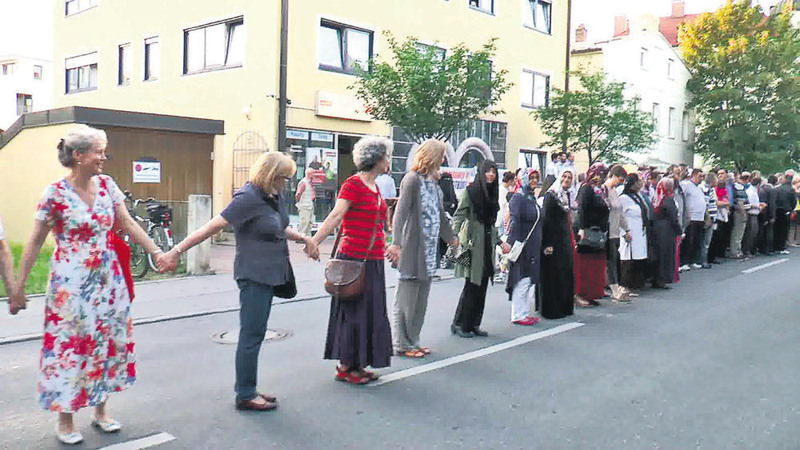 by Daily Sabah Jul 01, 2015 12:00 am
The Turkish community and German public joined forces on Tuesday night to stage a protest against attempted arson on the Hacı Bayram Mosque in Munich's Pasing district last week. The mosque, operated by the Turkish-Islamic Union for Religious Affairs (DİTİB), was targeted by unknown suspects that set fire to a small shed adjacent to the mosque. The mosque's imam prevented the fire from spreading when he noticed the flames and alerted the congregation, who helped to put out the fire.

On Tuesday evening, Turks and Germans formed a human chain outside the mosque to protest the attack. Representatives of the Turkish community said they were glad to have their German neighbors showing solidarity with them in the face of the attack.

Constanze Söllner-Schaar, a councilwoman for the Munich municipality, was among the participants in the protest. She said the mosque belonged to the entire community, to the applause of Turkish protesters. German protesters said in their statements at the demonstration that they would fight alongside Muslims against xenophobic and Islamophobic attacks.

Meanwhile, local police announced a 2,000-euro reward for tip-offs on the perpetrator or perpetrators of the attack.

Germany, where Islamophobia gained prominence with the infamous PEGIDA movement, has been home to frequent attacks on mosques in recent years. Parliament sent a delegation to Germany to investigate the attacks that mostly target Turkish mosques. The delegation reported that 297 attacks against mosques took place between 2001 and 2014, and German authorities failed to capture suspects in the overwhelming majority of attacks, ranging from arson attempts to the drawing of anti-Islamic signs on the walls of mosques.
Last Update: Jul 01, 2015 9:37 pm
RELATED TOPICS