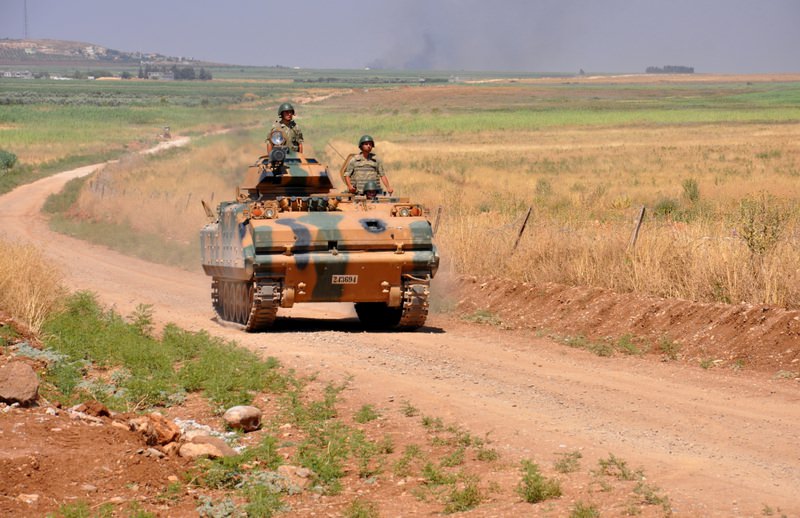 An armored vehicle patrolling along the Turkish border.
by Mehmet Solmaz Jul 02, 2015 12:00 am

With ISIS controlling large parts of northern Syria, Ankara will reportedly act in cooperation with the U.S.-led coalition and the Free Syrian Army to hit the militant group if it attempts to take control of strategic points near Azaz. If the region is left in the hands of ISIS, Turkey could see a huge influx of refugees

While Turkey has been witnessing fierce clashes between ISIS and the PKK-affiliated Democratic Union Party's (PYD) People's Protection Units (YPG) near its border for the past year, a senior state official told Daily Sabah that Ankara is adopting a detailed strategy to combat terrorist groups creating chaos next door to prevent a refugee influx into the country, which is already home to nearly 2 million Syrians escaping the civil war. Turkey's strategy includes direct shelling of ISIS militants in case of attempts to take control of strategic points near the northern city of Aleppo.

Acting in coordination with the anti-ISIS coalition, Turkish troops will make sure the crucial Syrian town is not threatened by ISIS as it will directly affect Turkey in terms of security and incoming refugees. As northern Syria is hit by both coalition and regime airstrikes, the YPG and ISIS do not only clash with each other, but also attempt to cleanse the region from the influence of moderate opposition group, the Free Syrian Army (FSA). Ankara aims to bolster the presence of the Western-backed FSA with possible artillery fire directed at ISIS.

The continued fight near the border is not solely leading the YPG to allegedly commit ethnic cleansing against Turkmens and Arabs or ISIS to continue its extreme terrorist activities, but it also creates a national threat to Turkey while further troubling the country with a financial burden caused by non-stop refugee arrivals at its border.

Ankara will reportedly contribute to anti-ISIS coalition airstrikes with artillery to prevent further enlargement of the extremist group. Turkish Armed Forces (TSK) shelling will take place in accordance with close cooperation with the coalition. Sources also indicate that Turkey is ready to discuss in what conditions it would allow the U.S. to use İncirlik Air Base in southern Turkey for attacks against ISIS.

Turkey's rules of engagement, which previously only targeted Syrian President Bashar Assad's regime, will become more comprehensive and include ISIS in its amended form. The implementation of the regulation in military intervention in Syria is reportedly completed and is expected to be put into effect in the upcoming days without losing time as Ankara's concerns are at their peak that the violence in Syria could extend to Turkey and lead to a costly protracted refugee situation in the country.

The militant group is also a national threat to Turkey because of its activities within the country. Dozens of ISIS-linked suspects were detained after simultaneous raids in five provinces across the country. Suspects were charged with financially supporting and providing militants for the organization. Furthermore, three ISIS militants were caught at the Syrian border and two suspects were sent to prison in Ankara, pending trial.

Turkey has repeatedly expressed that it will not allow the PYD, which has been accused of cleansing the areas it controls of rival Kurdish groups, Arabs and Turkmens, to bring its cantons together by meddling with the demographic structure of region. However, Daily Sabah's source claimed that if the militant group stops its "atrocities against other ethnic groups" and leaves control of the mainly Arab and Turkmen-populated town of Tal Abyad, Turkey will not engage in active force against the group. However, if the developments continue as they are, Turkey will consider the PYD a serious threat. "We will not give the PYD the opportunity for another ethnic war in the region," a senior state official said.

He also confirmed the claims of the exclusive story of Daily Sabah's Yusuf Selam İnanç on Monday. According to the report, a group of ISIS and Syrian regime commanders held a meeting at a gas production plant in al-Hasaka's al-Shaddadi area on May 28. The two warring factions met not to stop fighting each other, but to focus on a common enemy. The common enemy to be destroyed was the rebel forces, especially the moderate and Western-backed FSA, which recently made significant gains against the regime in Idlib, Aleppo and Deraa. A source close to the National Intelligence Organization (MİT), speaking on the condition of anonymity, told Daily Sabah that the Assad regime and ISIS made an agreement on that day at the gas production plant.

It has long been claimed that ISIS works for Iran or Assad, but there is no evidence to prove these conspiracy theories. However, when looking at the war conditions, local and temporary agreements are possible. Both Assad and ISIS hate other rebel forces – the regime considers the rebels terrorists and has entered a deadly war with them. ISIS sees the rebels as the main obstacle in its path to creating a new state in Iraq and Syria based on a strict interpretation of religious jurisprudence. The source revealed that according to the deal, the Assad regime and ISIS will cooperate in certain areas, especially where they are in trouble with rebel forces like northern Aleppo, and while ISIS will increase its attacks on the FSA, the regime will also intensify airstrikes. Moreover, the Syrian regime asked ISIS to specifically target some rebel leaders like Zahran Alloush, who controls the Jaysh al-Islam (Army of Islam) group that operates in east Ghouta in the Damascus suburbs. As a gift for ISIS' help to the regime against the FSA, the regime would give some cities like Tedmur and Sukhna to the militant group. ISIS, in response to the regime's cooperation, will continue selling oil via both pipelines and tankers.