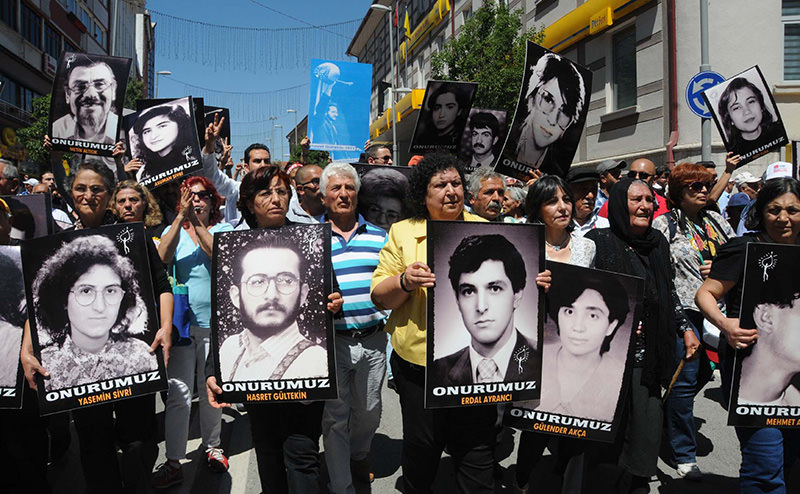 | DHA Photo
by Daily Sabah Jul 02, 2015 12:00 am
Ceremonies were held in the central city of Sivas on Thursday to remember 37 people, including Alevi intellectuals and artists who died when their hotel was burned down by a mob 22 years ago.

The commemoration events started with local authorities, including the governor, laying carnations in memory of the victims of the Madımak Hotel massacre, which was converted into a culture center years after the incident.

Later, thousands marched with photos of victims in downtown Sivas to the hotel. Among those attending the event were representatives of political parties, families of the victims, activists from various nongovernmental organizations and intellectuals.

Zeynep Altıok, daughter of poet Metin Altıok who died in the fire, was among those participating in the events. It was her first visit to the site since her father's death. Altıok, now a lawmaker from the Republican People's Party (CHP), laid carnations in front of the hotel and she and others observed a minute of silence in memory of the victims whose names were read out loud at the event. Altıok said that for 22 years she could not go to the hotel as it was too emotionally difficult for her.

Police took strict security measures in the city, and local police from surrounding regions were bussed in to provide assistance.

Events leading up to the Madımak massacre began when writers, poets, musicians and dignitaries, mostly from the Alevi community, arrived in the city to attend a festival to honor of Ottoman poet Pir Sultan Abdal. Aziz Nesin, a prominent writer known for his remarks about Islam that angered Sunnis, was among the guests at the festival. Nesin's argument with a journalist at a press conference concerning his anti-Islamic remarks prior to the festival added to tensions in the city. Provocateurs among the congregation of a mosque incited people to take a stand against the festival's participants after drums started playing on the festival grounds near the mosque, interrupting Friday prayers.

Chanting slogans against Nesin and others, a large crowd started a march on Sivas' streets, demanding the resignation of the Sivas governor who had organized the festival. The mob disrupted a concert by an Alevi musician and clashed with concertgoers. They then proceeded to throw stones at a monument erected in memory of Alevi poets. The mob dispersed briefly after the Sivas mayor calmed them, but they showed up again in the afternoon, marching to the Madımak Hotel this time. Removing pavement stones, the crowd threw them at the building. The hotel's occupants took refuge on the upper floors of the hotel.

Due to a lack of security measures, the size of the crowd increased in one hour. They set cars on fore in front of the hotel, and soon flames spilled into the building. Some hotel guests and staff managed to cross to an adjacent building housing the local offices of a political party while others on the top floors, including Nesin, were rescued by firefighters. The death toll was announced as 37, including two hotel staff and two people from the mob.

One day after the fire, 35 people were arrested, a number that rose to 190 in the following days, as 124 defendants were charged with attempting to "install a religious state by removing secular order," while the others were released. The charges stemmed from protesters' slogans during the riots against secularism, one of the pillars of the Constitution. They were also charged with multiple homicides. Thirty-three people were convicted and sentenced to life imprisonment. Critics of the trial claimed the real perpetrators behind the incident were not brought to justice.

Last year, the presidency's State Auditing Board issued a report that found the state was responsible for "grave negligence" in the handling of the incident. The report blamed state officials for not heeding warning signs of a social crisis in the city despite growing tensions. 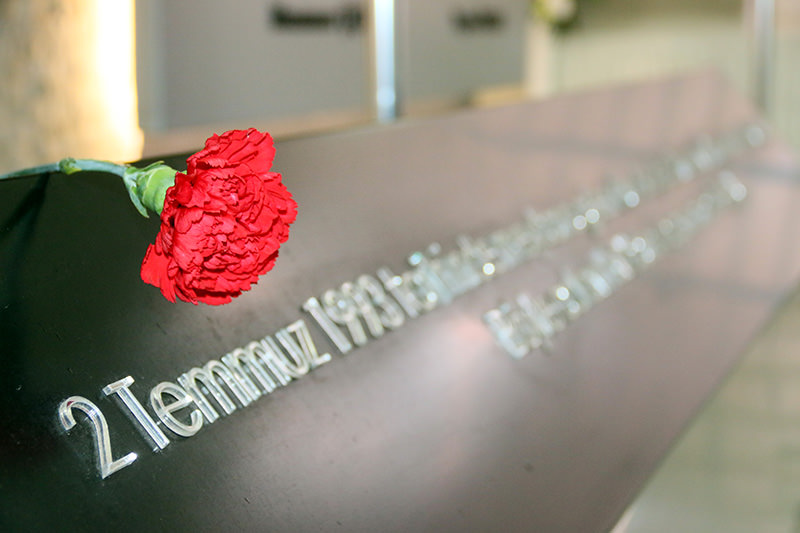