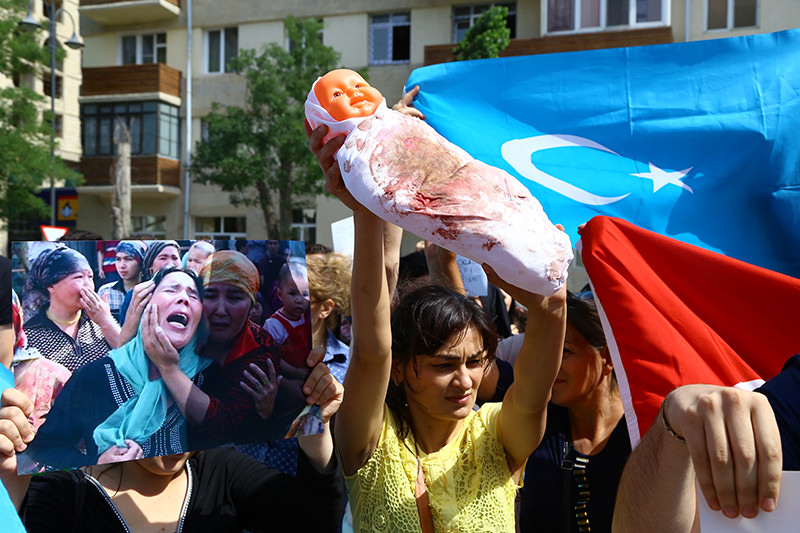 Turkish people gathered outside the Chinese Consulate to protest China's restrictions on Uighur Muslims (AA Photo)
by Anadolu Agency Jul 02, 2015 12:00 am
Protests broke out overnight all over Turkey with thousands of people taking to the streets to demand that China stop its alleged discrimination against Muslims.

Demonstrators gathered in Istanbul, İzmir, Trabzon, Samsun, Bursa, and 20 other locations late Wednesday to chant and shout for justice for an East Turkistan.

In some places protests continued into the early hours of Thursday morning.

The marches by several organizations and associations started around and after iftar - when Muslims break their daily fast - with people taking to the streets, holding placards and shouting slogans.

In Tarabya district of Istanbul - the home of the Chinese Consulate, and the largest protest - hundreds of members of the youth branch of the country's dominant political force, the AK Party, gathered outside the building where they broke fast with water and Turkish bagels.

Slogans such as "Long live hell for torturers", "Silence is consent, wake up and raise your voice" and "We stand with East Turkistan" were shouted.

The protests follow an official statement from the Turkish Foreign Ministry on Tuesday that expressed "deep concern" about reports that Beijing has instilled a fasting ban on segments of its Muslim population.

"It has been publicly heard with sorrow that there are reports of the fasting and fulfilling of religious duties by Uighur Turks being banned," the statement said.

It offered no explanation as to what it wanted China to do about the reported ban.

On Wednesday a spokeswoman for China's Foreign Ministry said that her government had noted Turkey's remarks and wanted clarification.

"All ethnic groups in China are entitled to the freedom of religious belief under Chinese constitution," Hua Chunying said through a translator.

In mid-June, it was widely reported that China had banned fasting in parts of Xinjiang Uighur Autonomous Region for Party members, civil servants, students and teachers.

On Thursday, Hua said that Beijing attached great importance to its developing relationship with Turkey.

"We hope we can develop the bilateral relationship, based on a mutual respect of each other's major concerns and common interests," she said.

"We hope that the Turkish side will work together with us to maintain the smooth development of the bilateral relationship."

The "concern" expressed Wednesday night is reflective of the sentiment that many Turks have with regard to the Uighur issue.

Uighur, a Turkic group that makes up around 45 percent of the population of Xinjiang, has accused China of carrying out repressive policies that restrain their religious, commercial and cultural activities.
Last Update: Jul 02, 2015 11:51 am
RELATED TOPICS