Deaths of 15 farm workers after accident highlights their troubles 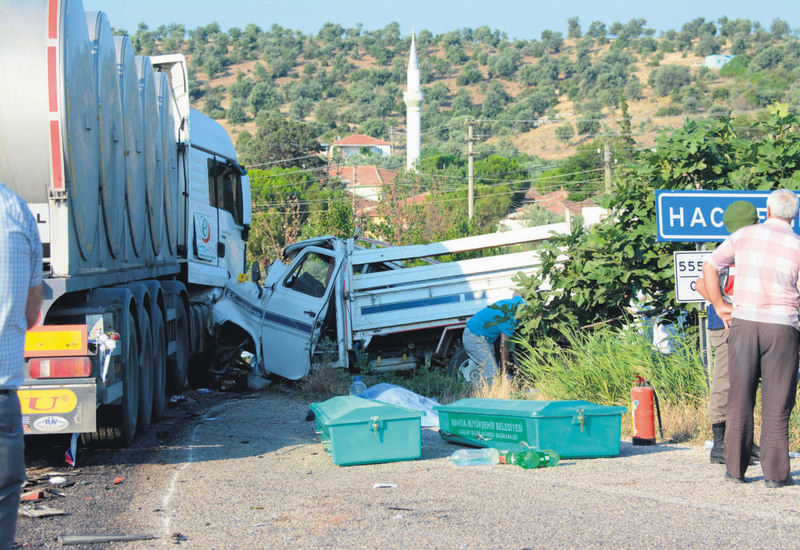 The scene of the accident. It was deadliest in recent memory for farm workers who hit the road before dawn and often in unsafe vehicles.
by Daily Sabah Jul 06, 2015 12:00 am

Fifteen farm workers were killed when a truck collided with a pickup truck in western Turkey yesterday, reminiscent of another accident that killed 17 farm workers in October, raising concerns about worker transportation

Fifteen farm workers, mostly women, were killed when a milk tanker ran into their pickup truck in Gölmarmara, a district in the western Turkish province of Manisa early on Monday. They were heading to a vineyard to pick vine leaves when the tanker, whose driver was reportedly asleep behind the wheel, crashed into the small truck.

The accident was the deadliest involving agricultural workers since October 2014. Seventeen farm workers were killed when their minibus crashed due to failed brakes in an accident in the western province of Isparta.

Yesterday's accident further raised concerns of the state of seasonal farm workers, especially their transportation. Speaking to the media, Manisa Governor Erdoğan Bektaş said the driver of the milk tanker was most likely asleep behind the wheel according to the initial investigation and the occupants of another minibus in the area claimed the tanker almost ran into them minutes before the accident. Although the tanker driver, who escaped injured, was chiefly responsible, as he changed lane suddenly and drove head-on into the pickup truck, the pickup truck driver, who was one of the two men killed in the accident, was also partly to blame as he apparently violated traffic rules by driving the pickup truck with 15 people crammed in the back. Though traffic inspections against overloaded pickup trucks, minibuses and similar vehicles carrying farm workers have increased, trucks with open backs are still commonly used for the transportation of farm laborers in the area. Workers from villages risk their lives for up to TL 50 ($18) daily en route to vineyards. All workers in the back of the pickup truck were women with multiple children. Burak Kaya, 15, the other male victim in the accident, was traveling with his mother, with whom he worked at the vineyard.

Following last year's deadly accident in Isparta, Parliament had set up a committee to investigate the problems seasonal farm workers faced. Amid the short-term solutions to help resolve the problem of transporting farm workers, the committee proposed in its report, which was wrapped up three months ago, for their transportation by trains. The committee also proposed a ban on transportation in the backs of trucks. Most farm workers, however, still are transported that way, often crammed in to cut the costs.

The accident highlighted how risky it is to travel by road in Turkey and how often people ignore traffic safety rules despite repeated warnings.

Although traffic accidents are seemingly on the decline from previous years, they still claim over 3,000 lives yearly. Along with the lack of inspections, reckless driving is the major cause of accidents, and both motorists and pedestrians often violate traffic rules.

Experts are calling for more frequent inspections of drivers and vehicles by security forces and the implementation of new regulations.
Last Update: Jul 06, 2015 8:13 pm
RELATED TOPICS