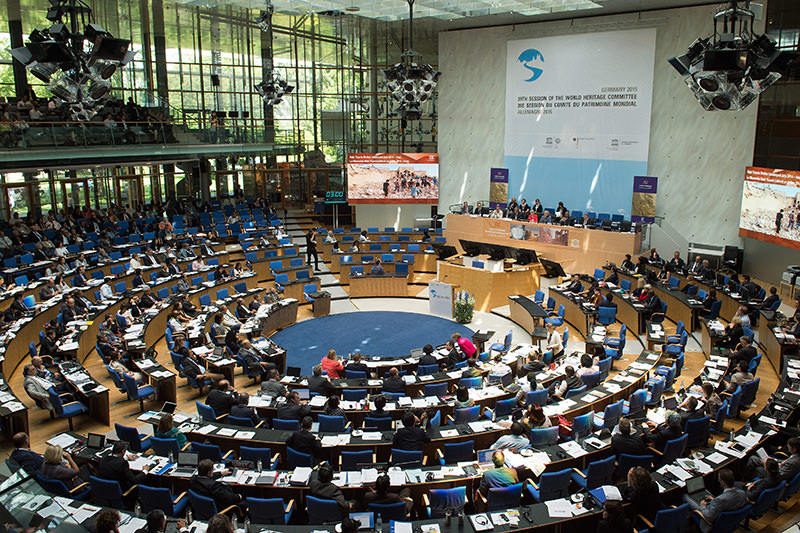 Delegates attend the 39th meeting of the UNESCO World Heritage Committee in Bonn, Germany, 29 June 2015 (EPA Photo)
by Nurbanu Kızıl Jul 09, 2015 12:00 am
Turkey will be hosting the United Nations Educational, Scientific and Cultural Organization (UNESCO)'s next World Heritage Committee meeting, which will take place from July 10 to 20, in 2016, the Ministry of Foreign Affairs announced on Wednesday.

According to reports, Turkey's UNESCO ambassador Gürcan Türkoğlu will preside over the meeting which will be held in Istanbul.

Two Turkish landmarks were recently added to the reputable list at the meeting. Diyarbakır Fortress and Hevsel Gardens in southeastern Turkey were added to the list and the ancient city of Ephesus situated in western Turkish province of İzmir was finally inscribed to the list on Sunday after a 21 year wait on the tentative list.

UNESCO defines the Diyarbakır Fortress and Hevsel Gardens Cultural Landscape as follows: Located on an escarpment of the Upper Tigris River Basin that is part of the so-called Fertile Crescent, the fortified city of Diyarbakir and the landscape around has been an important center since the Hellenistic period, through the Roman, Sassanid, Byzantine, Islamic and Ottoman times to the present. The site encompasses the Amida Mound, known as İçkale (inner castle), the 5.8km-long city walls of Diyarbakir with their numerous towers, gates, buttresses, and 63 inscriptions from different periods, as well as Hevsel Gardens, a green link between the city and the Tigris which supplied the city with food and water.

UNESCO also defined Ephesus as the ancient city situated on the coast of Ionia and dating back to the sixth century B.C., was one of the twelve cities of the Ionian League and the third largest city of Roman Asia Minor.

To be included on the World Heritage List, sites must be "of outstanding universal value and meet at least one out of 10 selection criteria of which the first is to represent a "masterpiece of human creative genius."