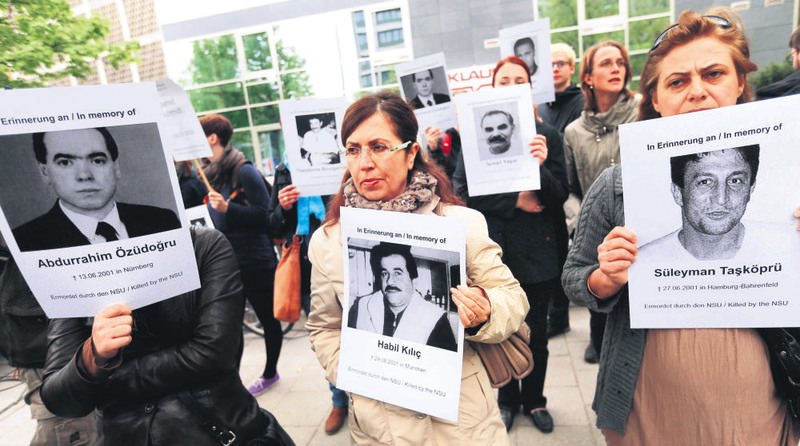 Protesters carrying photos of the NSU's victims outside a Munich courthouse where the gang's sole surviving member, Beate Zschaepe is being tried.
by Daily Sabah with AA Jul 10, 2015 12:00 am

Katharina König, a lawmaker from Germany's Die Linke party, said she received death threats during her inquiry into murders by a neo-Nazi gang responsible for the murder of eight Turks in Germany in the 2000s. König claims the gang is larger than previously thought and the state was aware of its activities

Katharina König, a deputy of Die Linke (The Left Party) from Germany's Thuringia state parliament, revealed that she received death threats for her investigation into the murders committed by the Thuringia-based National Socialist Underground (NSU), which is responsible for the racially-motivated murder of eight Turkish nationals, a Greek national and a German policewoman in a string of killings between 2000 and 2006 in Germany, allegedly by a trio of far-right militants.

The young lawmaker is determined to proceed with the inquiry she undertook as a member of a state parliamentary inquiry committee despite the threats.

König told Anadolu Agency (AA) that death threats increased in the recent weeks, and the last one was a letter she believed to be sent by a neo-Nazi group, which said she "wouldn't make it to her next birthday." German police are now investigating the threats while König feels scared. "I can't say I wasn't affected. I glance around carefully while walking on the street and try to not to remain alone," she said. But König is determined to deepen her inquiry despite the threats. "These threats show how important it is to fight the far-rightists. Threats will not hinder my struggle against the far-right, nor it will keep me from what I am doing on the NSU inquiry committee," she said.

The NSU became a symbol of rising racism in Germany when the shocking murders, previously believed to be isolated incidents, were revealed to be the work of a three-person gang entrenched in deep hatred toward German citizens of foreign origin, especially Turks. König, like many others investigating the murders, does not believe the NSU is operated only by three people, as the federal prosecutor emphasized in the first indictment of the trial of Beate Zschaepe, the sole surviving member of the NSU. Uwe Böhnhardt and Uwe Mundlos, two other NSU members, were found dead in 2011, apparently after the two committed suicide after Zschaepe surrendered. König said it is unrealistic to claim the gang was merely composed of three, and the ongoing trial, which began more than two years ago, brought more questions than answers. "The NSU is actually a network of more than 200 people, definitely not confined to three people. Certainly, these people did not actively participate in the bombings in Cologne and Nuremberg or bank robberies. But they were aware of the trio's ideological choice and aware of why they went underground," she stressed. König said Böhnhardt, Mundlos and Zschaepe were provided financial and logistical support "from driving licenses to phones," and there were those aware of the murders the trio committed.

At a hearing in January, lawyers for Ralf Wohlleben, a suspect accused of aiding and abetting the gang, requested the court summon a group of people with neo-Nazi connections to testify in the case concerning allegations that other far-right groups helped the NSU. Lawyers had claimed Blood and Honor, a neo-Nazi organization, may be behind the gang, as it promoted a system with independent, armed cells in pursuit of the neo-Nazi cause. They claimed a group of neo-Nazi fanatics operating in secret sustained the gang by funding and arming it.

In March, a witness in the trial was found dead in Karlsruhe. The victim was the ex-girlfriend of another witness with ties to the NSU. She had testified to a special committee in the state of Baden-Württemberg where the NSU is accused of killing a policewoman five years ago. The hearing where she testified was closed to the public as she said she felt "threatened," according to German media. Her ex-boyfriend Florian H. was found burned to death in his car in Stuttgart two years ago. A former neo-Nazi, he reportedly had connections with the NSU, and German media outlets claimed he knew who murdered Michele Kiesewetter, the slain policewoman. His death was treated as suspicious since it occurred before he was about testify to police on the case, though an investigation could not find any foul play.

She says that Mundlos, Böhnhardt and Zschaepe were close to at least 40 informants for the intelligence service, and the state has more knowledge than it revealed to the court about the gang but avoided sharing it with the court or the parliamentary committee. "We know that the intelligence was aware of the NSU trio's efforts to obtain weapons. Obtaining weapons certainly meant that they were planning criminal plots. We are not certain whether they were aware the NSU was behind the murders after they were committed. If they didn't act despite knowing who committed the murders, it would be horrible," she said.

König added that the families of the NSU victims had a right to know why their loved ones were killed, how much the state knew about the gang as well as how involved it was. "This is what I am trying to do: Help families find answers to these questions," she said. The lawmaker said Chancellor Angela Merkel had pledged there would not be any cover-up if German authorities were implicated, and König said her committee needed access to more documents to reveal the true extent of the gang's activities. "Some officials [state in their testimony that] they don't remember the past, and we face the obstacle of confidentiality in terms of access to [intelligence] documents. Moreover, these leave some questions unanswered. Unfortunately, I believe we will not be able to shed light entirely on the NSU's connections, but we, as the committee, nongovernmental organizations, journalists and lawyers for the victims' families, may reveal more if we remain determined to investigate further. We need more public support to achieve this," she said.

Murders, bombings and robberies regarded as separate crimes perpetrated by different culprits were coincidently found in 2011 to be the work of the NSU after two NSU members were found dead in an apparent suicide in November 2011 and Beate Zschaepe surrendered to police. The gun used in the murders was found in the house of gang members. Zschaepe did not utter a word in the hearings since her trial started in a move to delay a final verdict. She faces 27 charges regarding the gang's activities. Four others accused of aiding and abetting the gang are also on trial.

Failure of German authorities to find out more about the gang for years and the NSU members' past connections to informants recruited by intelligence services had led to a scandal in Germany.
Last Update: Jul 10, 2015 8:08 pm
RELATED TOPICS