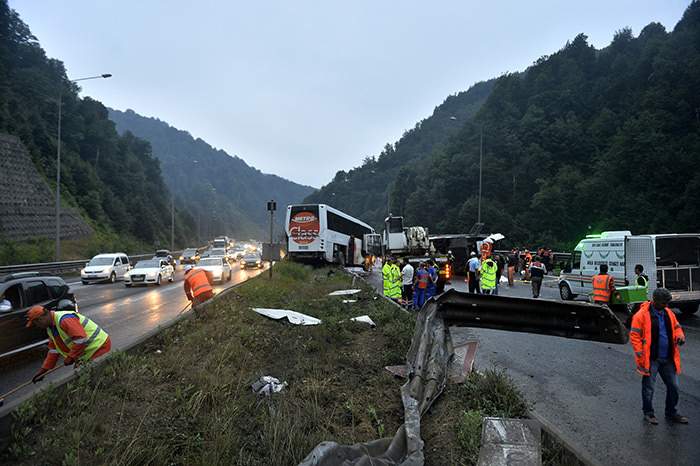 |AA Photo
by Daily Sabah with AA Jul 15, 2015 12:00 am
Seven people have been killed and dozens injured as two coach buses involved in two different traffic accidents on the TEM highway in theIstanbul direction, near the Bolu Mountain exit, according to the reports.

Two buses were involved in two collisions in the early hours of Wednesday morning on Turkey's Trans-European Motorway; 44 people were also injured.

A first coach, which was heading to Istanbul from the Niğde province, reportedly toppled over at the Bolu Mountain Tunnel after the driver lost control, police sources said.

As traffic teams were working at the scene, a second bus hit roadside barriers and narrowly avoided striking the already-crashed vehicle.

The Istanbul direction of the TEM highway has been closed to transportation, vehicles were directed to the D-100 highway, Bolu Mountain passage. National Medical Rescue Team, the Provincial Disaster and Emergency Directorate, 112 emergency teams, firefighters and traffic teams are working at the scene.
Last Update: Jul 15, 2015 5:13 pm
RELATED TOPICS