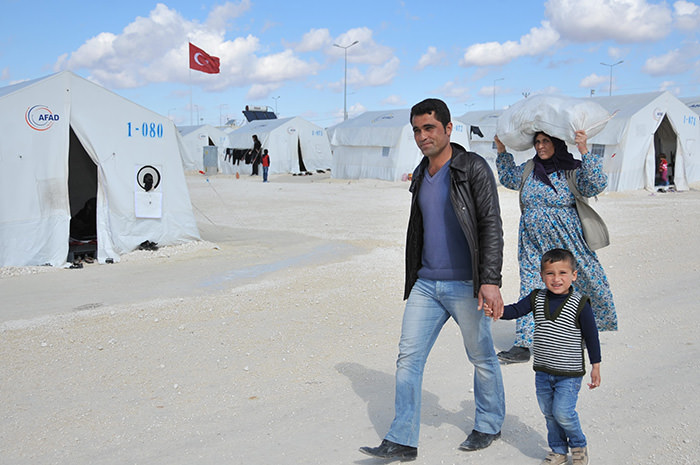 |AA Photo
by Daily Sabah with AA Jul 16, 2015 12:00 am
The United Nations special envoy to Syria, Staffan de Mistura, thanked Turkey for its acceptance of Syrian refugees on Wednesday.

"De Mistura conveyed his appreciation for the substantial effort by Turkey in welcoming and hosting a large number of Syrian refugees," the envoy's spokeswoman Jessy Chahine said in a statement released from Geneva.

"The special envoy also stressed the importance of the contribution of the regional countries to a political solution to the Syrian conflict."

Turkey has taken nearly two million of the 4 million refugees who have fled the war-torn nation since violence erupted in 2011, according to the UN's refugee agency. Turkey has also spent nearly six billion dollars since the beginning of the crisis for hosting the refugees.

De Mistura has been holding talks in an attempt to implement the Geneva Communique that sets out a six-point plan to stop the violence and move the sides in Syria towards a political settlement.

Earlier, de Mistura had said Turkey had an important role in the region and would participate in Geneva consultations on Syria.

More than 40 Syrian groups, including armed opposition groups, have been invited to attend talks that began in May.

According to recent U.N. figures, Turkey hosts nearly 2 million Syrian refugees who have fled the civil war in Syria, which has been continuing for over four years, in its 25 camps built by, Prime Ministry Disaster and Emergency Management Authority (AFAD). The camps have received several awards and been praised by the international visitors for their effort in providing sustainable services. The largest camp is in Suruç, in the southeastern province of Şanlıurfa, which opened in February 2015 and hosts nearly 25,000 refugees.
Last Update: Jul 16, 2015 10:30 am
RELATED TOPICS