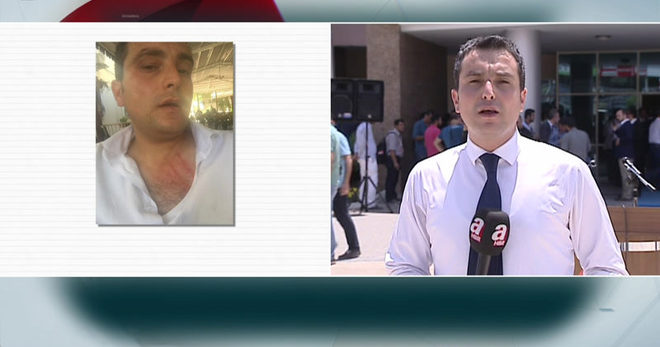 by Daily Sabah Jul 21, 2015 12:00 am
Turkey's leading news channel A Haber correspondent Sercan Bilgi and cameraman Orhan Şener were violently attacked by a group of people on Tuesday evening while following developments after the bomb attack in Turkey's southeastern Suruç district.

A group of four attacked the A Haber journalist while covering the events and also they were put forward as a target through provocative statements against them, such as calling them Islamic State of Iraq and al-Sham (ISIS) militants. They were also threatened to be thrown down from the roof while they were covering the story.

"Immediately after the explosion, we went to the scene. We were on the fourth floor of a building, doing a full live broadcast, the group tried to sabotage the live broadcast and then attempted to intimidate and threaten us. The group called on the crowd downstairs saying 'ISIS militants are here', attempting to provoke them," Bilgi said.

Bilgi suffered a neck injury as a result of the violent attack.
Last Update: Jul 22, 2015 8:33 am
RELATED TOPICS