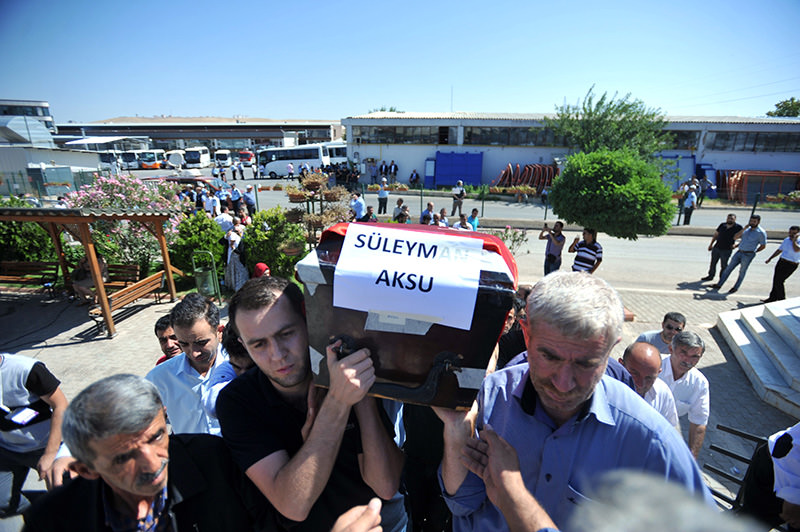 | AA Photo
by Daily Sabah Jul 21, 2015 12:00 am
The governorate of Turkey's southeastern province of Şanlıurfa cancelled its early morning decision (4.5 hours later) after it had called off all public demonstrations, marches, and press briefings in the town of Suruç, where Monday's deadly explosion took place, as well as in some other towns.

The Şanlıurfa governorate had taken such a decision in the early morning to prevent similar attacks from happening again.

The governorate's statement had read, "As per the 2911 numbered Meeting and Protest March Law's 17th article, every kind of march, press briefing, public demonstration, setting up a tent, and activities as such likely to take place with participation from other cities, are banned from taking place in our province and its districts."

An explosion took the lives of at least 31 people and injured 76 more on Monday in the Suruç district of Turkey's southeastern province of Şanlıurfa, which is located some 10 kilometers north of Syrian town of Kobani. The terrorist attack that took place at the garden of Amara Culture Center of Suruç Municipality has been caused by a suicide bomber according to Şanlıurfa governor.

Twenty-three were killed at the scene of the explosion, while seven people died in hospitals due to their wounds. Suruç District Governor Abdullah Çiftçi confirmed the death toll at 30 while stating that 20 people still remain in critical condition.

The explosion targeted dozens of people from a pro-Kurdish group, Socialist Youth Associations Federation (SGDF), who gathered at the culture center before their journey to Kobani, according to various sources.

The youth participating in the SGDF campaign were going to help restructure Kobani. The group had previously released a press statement on Sunday before starting their journey in Istanbul. The group was later joined by another group from Ankara.

The group aimed to continue their activities in Kobani until July 26, which included building a playground, planting a memorial forest and giving health services to local people.