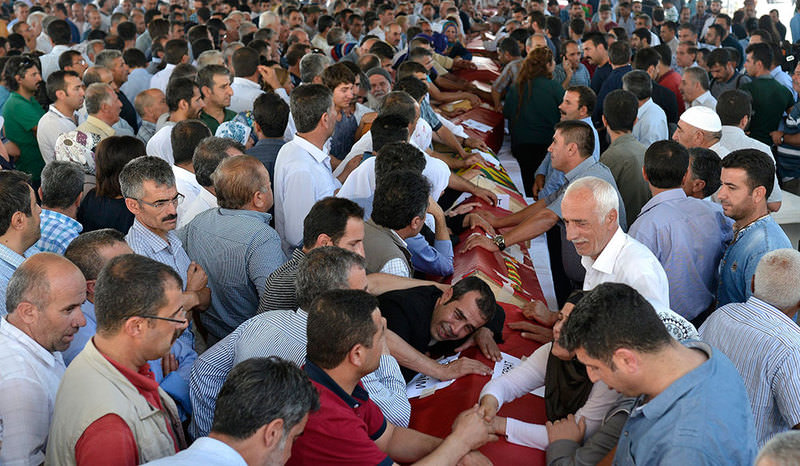 
After a terror bombing attack that killed 32 victims in the south eastern Turkish town of Suruç, a mass funeral ceremony for the dead took place in the nearby city of Gaziantep.

Hundreds of mourners attended the funeral, shouting slogans and weeping in the courtyard of a mosque. The 23 bodies were sent their hometown for burial.

Following the attack, bodies of the victims were transferred to Gaziantep for forensic identification. So far 28 bodies have been identified and delivered to the families. Additionally, 12 victims have been buried so far, and 18 are expected to be buried later today in funeral ceremonies throughout Turkey.

The suicide bombing, with assumed connections to the self-proclaimed Islamic State of Iraq and Sham (ISIS) targeted, mostly young volunteers who were headed to the neighboring city of Kobani in Syria to assist in rebuilding the town.

The activists, who were mainly university students, were part of the Federation of Socialist Youth Organizations. The bombing took place during a press conference at the Amara Cultural Center.

Around 100 people were also wounded from the attack.

Though ISIS and other militant groups have not claimed responsibility for the attacks, Turkish officials believe that it was done in retaliation for recent advances in the fight against ISIS.