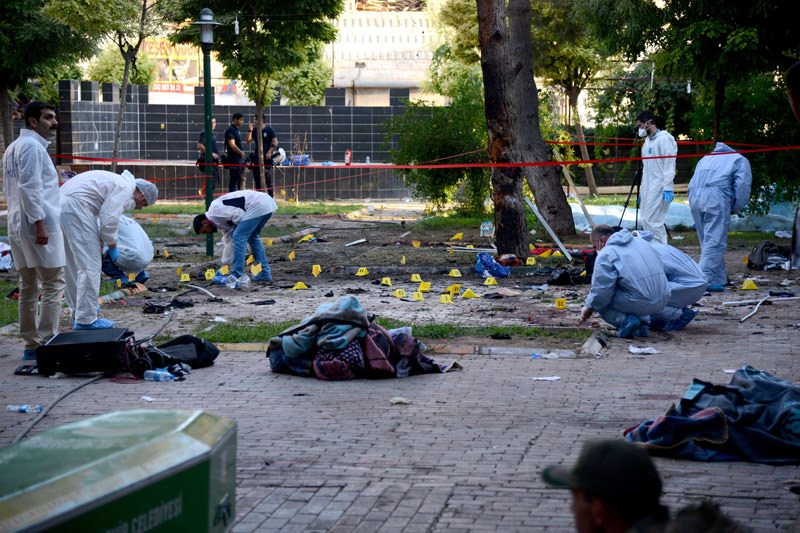 The suspected suicide bomber in Suruç, Turkey was a Turkish citizen that traveled illegally to Syria in 2014, senior Turkish government official has said on Wednesday.

According to police, Alagöz and his brother Yunus Emre went missing from their home in the southeastern province of Adiyaman six months ago.

Their family fled their home following media reports on the bombing that indicated Alagöz was a suspect.

Turkish media reported Alagöz's mother as saying he had returned home 10 days ago but then disappeared.

Yunus Emre was running a tea house in Adiyaman province that was closed 18 months ago by police and the local authority, according to police, who said the brother was suspected of being involved in providing recruits to Daesh.

Monday's attack targeted a group of activists holding a news conference about an upcoming visit to help rebuild Kobani, the Syrian town devastated by fighting between Daesh and Kurdish militias.

Since the blast, several Turkish officials, including Prime Minister Ahmet Davutoğlu, have named the extremist group as being likely to have carried out the attack. However, no group has yet claimed responsibility.

The suicide bomber detonated himself taking the lives of 32 people and injuring 75 more in the Suruç district of Turkey's southeastern province of Şanlıurfa, which is located some 10 kilometers north of Syrian town of Kobani. The terrorist attack that took place at the garden of Amara Culture Center of Suruç Municipality.

Twenty-three were killed at the scene of the explosion, while nine others died in hospitals due to their wounds. According to the Suruç District Governor Abdullah Çiftçi, 18 people still remain in critical condition.