What is Turkey's SGDF, Federation of Socialist Youth Associations? 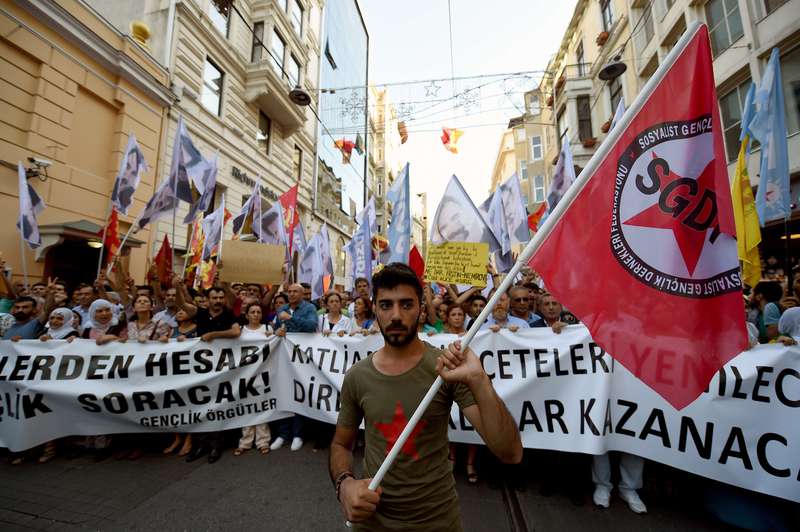 A protester holds a flag of attacked left-wing group SGDF (AFP Photo)
by Daily Sabah Jul 22, 2015 12:00 am
In the aftermath of the bombing in Turkey's southeastern Suruç district, questions regarding the organizational structure of the Federation of Socialist Youth Associations (SGDF), the group which was attacked on Monday, has been raised.

In its recent political ties, SGDF is known to be a youth branch of the Socialist Party of the Oppressed (ESP), which is a Marxist-Leninist political party that defines itself as "a militant revolutionary socialist party fighting for a workers'-labourers' federative republic in Turkey and Northern Kurdistan."

People's Democratic Party (HDP) Co-chair Figen Yüksekdağ was previously the founder and chair of ESP between 2010 and 2014. She later resigned from the party leadership and joined HDP.

SGDF's organizational structure mainly consists of university and high school students. The group has participated in leftist demonstrations throughout Turkey previously, and most famously during Turkey's Gezi Park riots. The group shared a tweet on their twitter account before Monday's attack saying, "The children of Gezi are gathered in Suruç's Amara Cultural Center to go to Kobani."

The group was at Amara Cultural Center prior to the bombing to release a press statement before leaving for Kobani, a Syrian town on the Turkish border.
Last Update: Jul 22, 2015 10:12 am
RELATED TOPICS