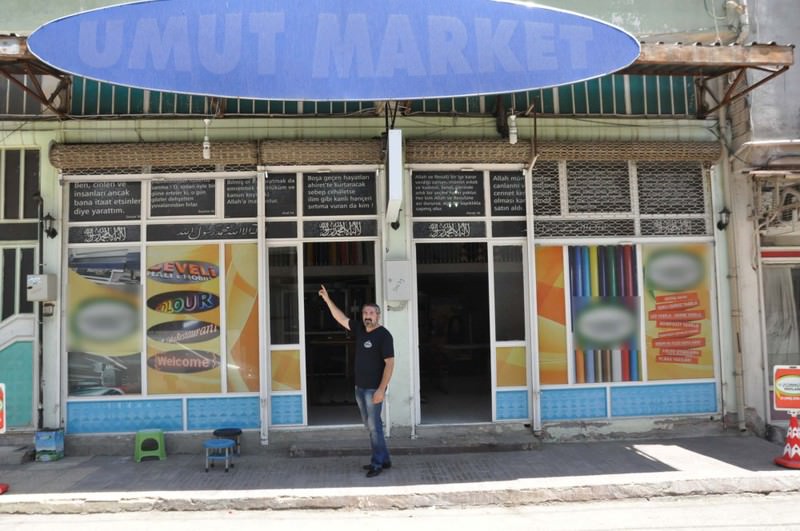 This shop in Adu0131yaman was once a tea house where two bombers, one of them the owner's brother, visited. Turkish media depicts the place as an ISIS recruitment center to the chagrin of its new owner.
by Compiled from Wire Services Jul 24, 2015 12:00 am

Adıyaman, a southeastern city of 280,000 people, found itself at the heart of a media campaign depicting it as a breeding ground for ISIS militants after two bombers linked to ISIS hailed from there. However, residents vehemently dismiss such claims

The spotlight turned on Adıyaman, a southeastern city of 280,000 people, after it was revealed to be the hometown of two men linked to the Islamic State of Iraq and al-Sham (ISIS). One of them was accused of carrying out the bombing at a political rally in the southeastern province of Diyarbakır in June that killed four people. The other was the suicide bomber whose attack during another rally left 32 dead on July 20 in Şanlıurfa, another southeastern province.

Some Turkish media outlets were quick to adorn their front pages with headlines such as "Adıyaman again," portraying the city as a breeding ground for ISIS. This was due, in part, to the fact that the two men reportedly knew each other and frequented a teahouse operated by the Şanlıurfa bomber's brother. But locals deny reports of people flocking to join ISIS, which controls a large stretch of territories in northern Syria, opposite the Turkish border.

ISIS, whose low-level militants and some senior leaders are largely those who streamed into Syria in recent years, is known for recruiting Turkish sympathizers as well. Indeed, eight suspects accused of links to ISIS were detained in Adıyaman on Friday as part of nationwide operations against the group. However, Adıyaman residents are disturbed that their city is depicted by the media as the sole place where the armed group draws support.

Zeki Dişkaya, head of the Adıyaman Development Platform, a nongovernmental organization (NGO) based in the city, said the city has previously been a city associated with terrorism. "We condemn the media outlets doing this. Terror attacks, like for everyone else, are unacceptable for the people of Adıyaman," he said. Dişkaya stressed it was "their guilt" with regards to letting "those children get brainwashed," referring to the two bombers in their 20s. İbrahim Aslan, head of another NGO, highlighted that terrorism has no country, no town and no religion. He links the isolated cases of ISIS recruitment in Adıyaman to "desperate unemployed youth" tricked into joining the group.

The association with terrorism perhaps impacted Emin Çokgezer the most in the city. The 37-year-old owner of an Adıyaman-based advertising agency is the new owner of the İslam Tea House that the two bombers frequented. He rented the place four months ago after the teahouse was closed down, and since its shop adorned the pages of national newspapers as "a recruitment center for ISIS," he claims his business is faring badly. "I wasn't here when some journalists took pictures and reported this was the place where the bombers were trained. They claimed it was 'a liaison office' for ISIS. I will file a lawsuit against them," he said. Çokgezer understandably fears for his life and seeks protection, saying his shop may be attacked. Still, he keeps the signs left by the previous tenant, which have verses from the Quran. "We are Muslims after all. What harm would be done by keeping them there?" he said, pointing to verses written in a white font against a black background hung on the exterior of the small shop. He emphasized that Adıyaman is a peaceful city, adding that associating the entire city with attacks launched by two people from Adıyaman is wrong.

Other shopkeepers on the street where the former teahouse is located are also bothered by the media reports. They deny the claims that the place was a recruitment center. "They were harmless people," shopkeepers said about the teahouse owner and its patrons. Although Adıyaman strives to be a commercial hub in southeastern Turkey, it is still largely known for tourist attractions, such as Mount Nemrut, famous for mountaintop statues dating back to the ancient Kommagene kingdom, which ruled the region more than 2,000 years ago.

For the Turkish public and religious groups, Adıyaman is home to Menzil, a religious community based in a small village in the city. A branch of the Sufi Naqshbandi order of Sunni Islam, the Menzil cult attracts thousands of faithful to the village almost year round. The community is strictly apolitical and denounces ISIS and militant groups branding themselves as Salafists. Followers of the cult as well as people seeking redemption from their past sins in line with Islamic beliefs, flock to the village simply to pray.

Apart from Menzil, there are a few other Muslim religious communities in Adıyaman, but none are known to have any association with ISIS or similar groups.

Yet, it does not stop rumors similar to those that launched a witch hunt against conservatives in the late 1990s by the Turkish media. Some media outlets claim occasional funerals of ISIS members killed in Syria are held secretly in the city, though no evidence of that exists.

Nevertheless, especially in the wake of the bombing in Şanlıurfa, a disturbing trend perpetuated by supporters of the terrorist organization the PKK targets conservatives not affiliated with ISIS. Two men were killed reportedly by pro-PKK groups simply because they had beards in the fashion of ISIS militants.
Last Update: Jul 24, 2015 9:33 pm
RELATED TOPICS