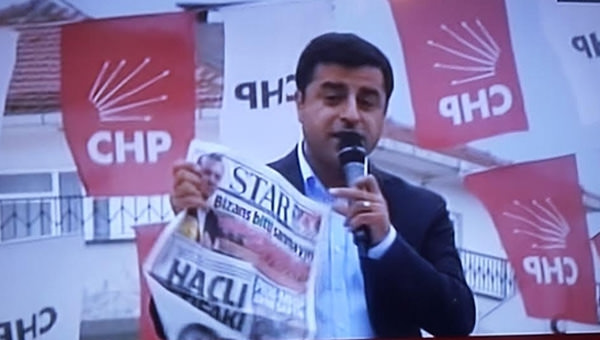 by Daily Sabah Jul 24, 2015 12:00 am
Star Media Group has released a statement on Friday afternoon, after a suspicious package was left in front of the group's building in Istanbul's ikitelli district, which was later detonated by the bomb squad at the scene.

The bomb squad stated that the package was a concealed time bomb wrapped in a banner with the initials of an illegal left-wing organization Marxist-Leninist Communist Party (MLKP).

"The time bomb was notified to officials by the security guards and it was detonated successfully by the bomb squad that called to the scene," the statement added.

The statement said that the Star Media Group will not give up, even for a short moment, even after efforts of the terrorists trying to stop them from exposing the truth and games played against Turkey.

The Star Newspaper was targeted by the People's Democratic Party (HDP) co-chair Selahattin Demirtaş during the election campaign for Turkey's June 7 parliamentary elections.

The Star Media Group's statement added that Demirtaş, Doğan Media Group and the Gülenist parallel structure need to be reminded that their threats are a motivation for the group to continue revealing the threats and all moves against Turkey.

The Media Association has released a statement condemning the incident saying, "The incident seems to be a sequel to the recent speech made, targeting some media groups, by the political party leader, who should come out strongly against the sad developments of this type."

"As Media Association, we call all politicians and media groups to act more responsible to avoid any more of such events," the statement read.
Last Update: Jul 25, 2015 12:05 am
RELATED TOPICS