Police detain 297, including 37 foreigners, across Turkey in anti-terror raids against ISIS, PKK and DHKP-C 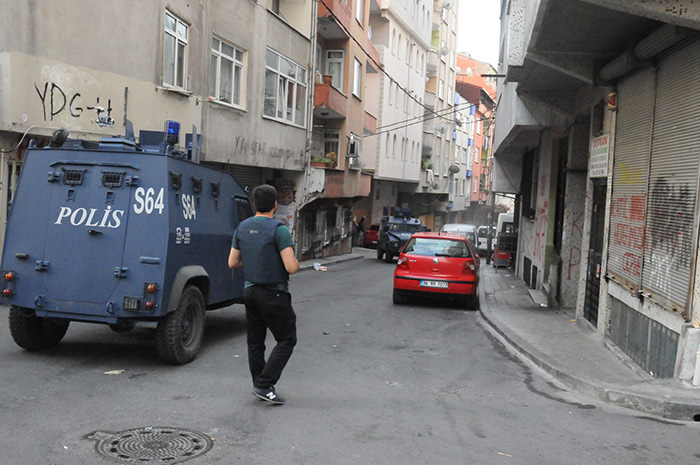 "Simultaneous operations have been conducted by Turkey's security forces in 13 provinces against a large number of people considered to be preparing for operations against civilians. A total of 251 people belonging to terrorist organizations have been detained so far," the Prime Ministry said, however the number was revised later in the afternoon to 297

A female member of the DHKP-C was killed in clashes that erupted between the police and suspects. According to sources, police raided an address in Istanbul's Bağcılar district, and while the special operations team was about to enter the building, fire opened on them from inside. An armed female was killed as a result of the short clash. The suspect killed in the clash, identified as Günay Özarslan, was allegedly planning a suicide attack.

More than 5,000 officers, 2,000 of them riot police, were assigned in Istanbul during the large-scale, counterterror operation backed by the Air Force. The operations were conducted simultaneously in 26 districts in the city, while 140 locations were raided. A total of 98 suspects, 37 of whom are foreigners, were detained, and six weapons as well as a slew of documents belonging to terrorist organizations were seized during the raids.

The police raid in the southeastern province of Şanlıurfa saw 35 people linked to the PKK militant group detained. The province witnessed a major escalation in tensions following a suicide bombing on Monday plus the fatal shooting of two police officers two days later.

The Şanlıurfa operations saw raids in Suruç – the location of Monday's ISIS-linked bombing in which 32 people died – plus Ceylanpınar, where two officers were found shot dead at their shared home on Wednesday.

The operation was launched after violence committed by ISIS and the PKK escalated over the last few days. While the government gave a go-ahead to the police operation, Turkish airstrikes pounded ISIS positions in Syria in a pre-dawn operation on Friday.