Number of detained reaches 590 in anti-terror raids against ISIS, PKK and DHKP-C 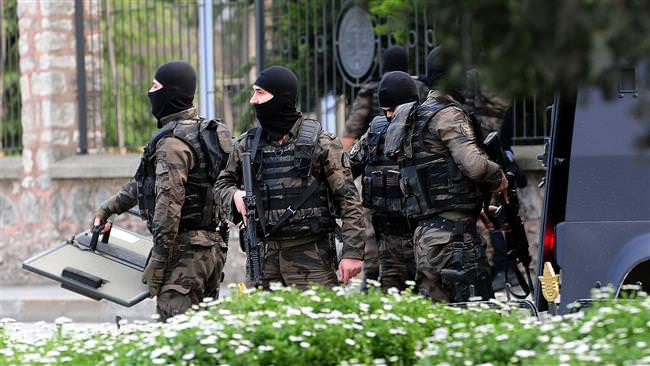 Turkish police have detained a total of 590 people, including at least 37 foreigners, suspected of having ties with terrorist groups across Turkey, said Prime Minister Ahmet Davutoğlu Saturday.

The nationwide anti-terror operation comes days after 32 people were killed in the southeastern Turkish province of Şanlıurfa on Monday in a self-proclaimed Islamic State of Iraq and Sham (ISIS) suspected suicide attack.

Many people were detained Saturday morning in the anti-terror operations in Istanbul. Police did not divulge the exact number of those apprehended.

A total of 54 people were apprehended Saturday in Adana province, southern Turkey, They are suspected of being members of either ISIS or of the Kurdish Patriotic Revolutionary Youth Movement (YDG-H) a youth organization founded by PKK sympathizers.

Many, suspected of being members of YDG-H were apprehended in Izmir's Menemen district, but police did not divulge the exact number.

Some 300 police forces participated in the operation, in which 16 people were detained.

Police sources said that the operation is continuing and the number of those detained may rise.

The DHKP-C was mostly active during the Cold War era, but the group has revived its attacks in recent years. It was involved in the killing of a senior prosecutor in Istanbul in March.

At least eight people were detained in eastern Turkish province of Erzincan in police operations.

Police of the southeastern Turkish province of Şanlıurfa staged a simultaneous anti-PKK operation in Suruç - the location of Monday's ISIS-linked bombing in which 32 people died - and in Ceylanpınar, where the two officers were found shot dead at their shared home on Wednesday, as well as in Birecik district.