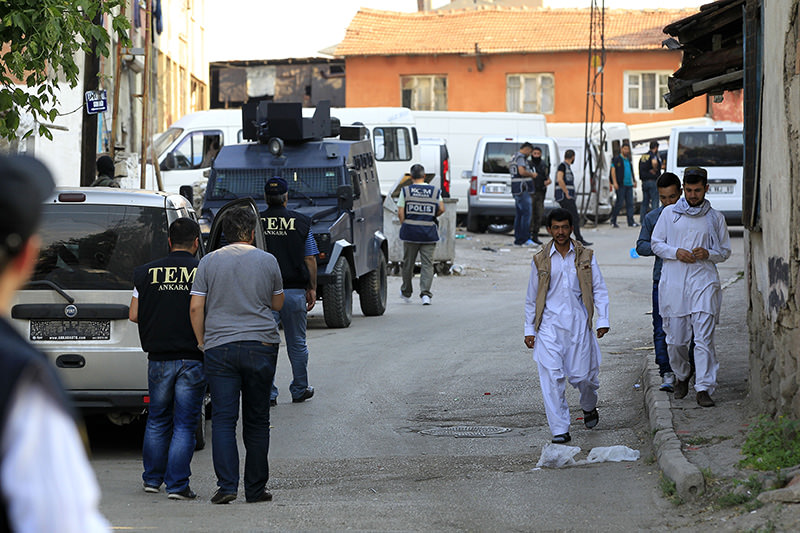 | AA Photo
by Daily Sabah with AA Jul 27, 2015 12:00 am
The Prime Ministry of Turkey released a statement on Monday stating that Turkish police have detained 1,050 suspects so far in 34 cities around Turkey in anti-terror operations.


"Within the framework of ongoing investigations, as of the date of July 27, 2015, in anti-terror operations against ISIS, the PKK and other marginal left-wing organizations, a total of 1,050 people who were suspected of having links to these organizations and were carrying out armed actions against our security forces and citizens as well as those who were performing illegal activities which threaten public order, were detained in simultaneous operations carried out in 34 provinces across Turkey. The judicial process about the detainees still continues," said the statement.

Remarking that operations against the PKK, DHKP-C and ISIS (the self-proclaimed Islamic State of Iraq and al-Sham) terrorist organizations, which not only threaten Turkey's national security but also endanger the lives of innocent civilians, are being carried out across Turkey and beyond the border, the statement released by the Prime Ministry said once again highlighting Turkey's determination to fight against terrorism.

The statement pointed out that in the airstrikes conducted on July 26, PKK shelters, coves annd caves were hit during the operations.

Reminding that within the framework Article 4 of the North Atlantic Treaty, the NATO Security Council has been called for a meeting on Tuesday to be informed on the nation-wide terrorist attacks and the measures Turkey has taken to combat the attacks, the Prime Ministry said that the Turkish Foreign Ministry is taking the necessary initiatives with friendly and allied nations under the supervision of international organizations.

Turkey will continue to fight against the terrorist threats from outside and inside, the statement added.

Earlier, Turkish security forces said that at least 256 suspects were detained in nationwide operations on Monday.

Police said that 15 people suspected of links with ISIS were arrested in raids in Ankara province on Monday morning.

In the eastern province of Erzurum, 34 people were detained during an anti-PKK operation.

In the southern province of Antalya, 20 people were detained in an anti-PKK operation.

In the southwestern province of Muğla, police detained six people allegedly linked with the PKK.

In the southern province of Mersin, security forces detained 16 people in an anti-ISIS operation and also seized four rifles, including a shotgun.

In the southeastern province of Batman, nine people were caught in joint operations against the PKK and ISIS. Police said that six out of the nine suspects were the members of the Patriotic Revolutionist Youth Movement (YDG-H) linked to the PKK, while the rest were linked with ISIS.

In the southeastern province of Gaziantep, security forces detained 21 people in an operation against the Kurdistan Community Union (KCK), an umbrella organization of the PKK. Police said they were looking for 14 more suspects in the area. An unlicensed pistol, three licensed shotguns, blank firing guns, four magazines, 104 cartridges, two balaclavas, nine mobile phones, 10 computers, nine mobile phone SIM cards and documents belonging to the organization were also seized in the operation.

The nationwide operations are the latest in a recent wave of arrests that have seen hundreds of suspected ISIS, PKK and DHKP-C supporters arrested across Turkey.

The PKK is listed as a terror organization by the U.S., the EU and Turkey.

Turkey recently launched airstrikes against ISIS and the PKK in Syria and Iraq. On Friday night and in the early hours of Saturday, Turkish jets bombed PKK camps in northern Iraq for the first time in the last two-and-a-half years. Turkey also launched attacks against ISIS. Turkish jets again hit PKK targets inside and outside Turkey on Sunday night.