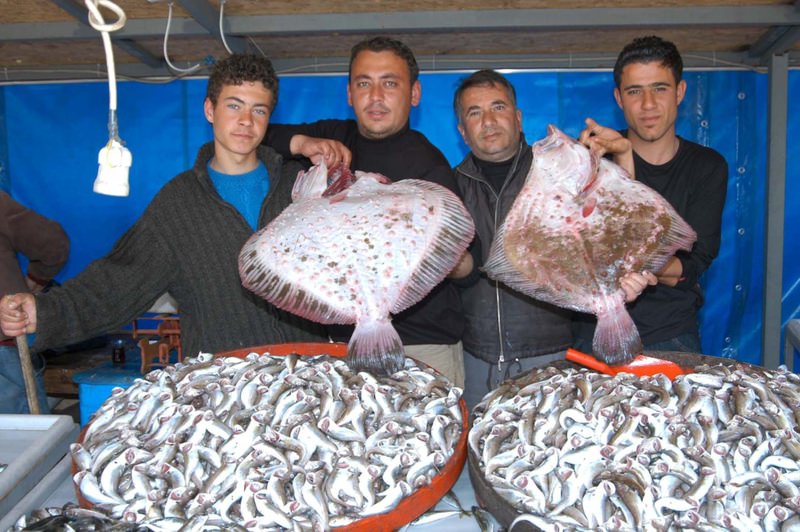 Fishermen in city of Zonguldak displaying large flatfish they caught. Flatfish is among the species at the risk of extinction in Turkey due to overfishing.
by Burcu Çalık Aug 04, 2015 12:00 am

As the threat of overfishing looms over Turkey's rapidly deteriorating fish stocks, the country is preparing to introduce tougher measures including a partial ban on fishing

Authorities moved to find a solution to Turkey's decreasing fish stocks where overfishing deals a blow to the stocks in a country abundant with fish species.

The Food, Agriculture and Livestock Ministry, which oversees commercial fishing, is readying a series of measures to save the fish from extinction in Turkish seas. Priority will be given to flatfish, a species facing a serious shortage in stocks. The ministry plans to introduce a brief ban on fishing for flatfish next year. Also next year, millions of newborn flatfish will be released into the seas. The ministry has already released 50,000 young flatfish and 10,000 sturgeons.

Turkey saw a 30 percent decline in the amount of fish caught in the past decade, raising concerns on the effect of overfishing on fish stocks. Experts warn high levels of fishing, coupled with growing popularity of amateur fishing, will likely drive numerous species to extinction soon.

Statistics show the amount of fish caught in 2014 was 231,000 tons, a sharp decrease compared to more than 334,000 tons in 2005. Anchovy, sardine and mackerel saw the lowest yield caught last year in the past 10 years. The amount of bottom fish, ranging from grey mullet to flatfish and bream, caught in the past 10 years have hit rock bottom, literally. Only the amount of blue fish, sprat fish and a few other species were spared from the decline, according to the statistics.

Turkey had stopped issuing new licenses to large fishing vessels since 2012 to preserve fish stocks. In three years, operators of some 1,000 fishing boats longer than 10 meters received payments in exchange of stopping their fishing activities.

A draft bill is expected to be approved by Parliament to regulate the fishing with a consideration to further preserve fish stocks. The bill brings a total ban on underwater fishing. All fishing boats will also be monitored by a satellite system against illegal fishing.

There are more than 15,000 fishing boats in Turkey, with only 10 percent of them being seiners, while others are commercial vessels operating near the coast. Seiners collect 90 percent of the fish while other boats have a very small share in fishing yields. The total amount of the fish caught by professional and amateur fishermen fluctuate between around 400,000 to 500,000 tons per year, and half of the yields consist of anchovy, a species commonly found in northern Turkey's Black Sea.

The Black Sea is where 70 percent of all caught fish in Turkey is found although it is a poor region in terms of diversity of species. The Mediterranean Sea, although rich in diversity of fauna, makes up only 7 percent of the total amount.

Bottom fish are especially under threat due to their spawning period being longer than other migratory species, according to experts. A Flatfish, for instance, can only spawn when it is 3 years old while anchovy spawn within one year.
RELATED TOPICS