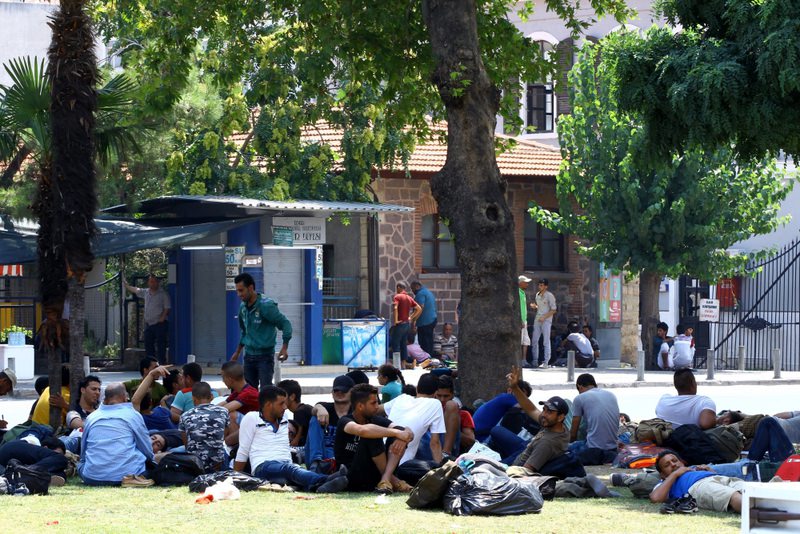 by Daily Sabah Aug 05, 2015 12:00 am
Turkey is struggling to cope with its western cities' ever-increasing influx of refugees who are in pursuit of an illegal journey to European countries. A larger "removal" center for migrants who will be deported is in the works in northwestern Turkey and authorities increasingly intervene to stop the deadly journeys, but the high numbers of migrants captured indicates there is no quick end to problem.

Syrian refugees, stuck between a civil war and an uncertain future in their country, make up the majority of those flocking to Turkish cities on the Aegean coast to board boats heading to Greece, their main gateway to Europe. Turkey, meanwhile, is stuck between offering a dignified life for refugees, which brings a huge financial burden, and stopping their dangerous journeys that occasionally ending up at the bottom of sea as the overcrowded decrepit boats have little chance of completing the journey.

In Ayvacık, a northwestern town in Çanakkale province, a popular crossing point to Greece for migrants, a new, modern removal center is being built to house captured migrants. It will replace the existing one, which has a capacity of only 80 migrants. The new center will have capacity for 400 people and will be completed by next year. It will be built on 8,315 square meters and will have two blocks and two floors. Authorities say it will provide more humanitarian conditions for migrants during the process of removal. Ayvacık was in the headlines recently when residents of a village there, fed up with migrant smugglers, captured them and tied them up in the town square after they came to the village they used to keep smuggled migrants before transferring them to boats.

Deterring migrants, often Afghans and Syrians, is impossible as they say their desperate journey, which frequently ends in death, is worth taking, rather than leading a life at the time of war and poverty. With refugee camps in southern Turkey already full, authorities have little choice but to let migrants take shelter outdoors. The country is home to over 1.8 million Syrians. Basmane, a district in İzmir, a large city on the Aegean coast, is full of Syrians who live in parks, mosques courtyards and crumbling old buildings, waiting for a boat to the Greek islands in trips organized by human smugglers. Police recently combed a neighborhood in Basmane where Syrians stay and confiscated substandard life vests Syrians kept with them for their journey to Greece. Exploiting the huge demand for life vests, local producers have turned to offer cheap, low-quality vests that are nothing more than a simple vest that would not keep a person afloat. This is as much as the police can do to help them, as the migrants have illegally entered Turkey. Seemingly, there is no other short-term solution, as migrants are determined to return even when they are sent back to their countries or refugee camps. As Fathi Horan, a Syrian who arrived in Basmane four days ago said, it is either dying in Syria at war or at sea while crossing to Greece. Horan told İhlas News Agency that he paid $1,100 to smugglers and awaits their signal.
RELATED TOPICS