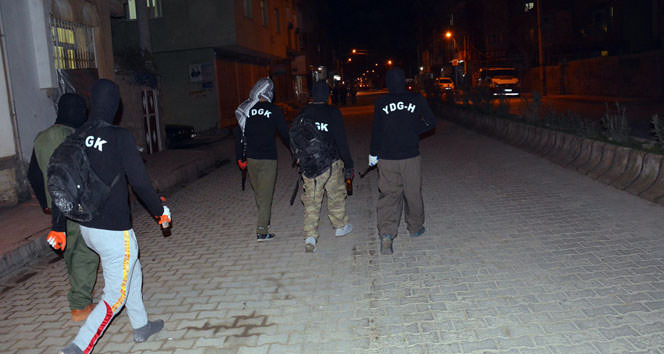 by Daily Sabah Aug 07, 2015 12:00 am
A group of locals of Yenişehir district in southeastern city of Diyarbakır were raided during a wedding late on Thursday by the members of the Patriotic Revolutionist Youth Movement (YDG-H) terrorist organization, which is the youth wing of the PKK.

While the wedding guests were doing the traditional Anatolian dance 'halay', the terrorists interrupted the celebrations with long-barreled weapons and masks, forcing them to call the wedding off.

The group of YDG-H terrorists threatened to 'spill blood if they did not cancel the wedding'. The wedding guests scattered in fear and the wedding ended.

After leaving the house in which the wedding celebrations were held, the terrorists attacked police forces with stun grenades and fireworks at the Seyrantepe junction.

Turkish police launched large-scale investigations to capture the masked and armed terrorists which fled the region after the attack.

Previously on July 7, Turkish Police detained 11 suspects in connection with the PKK's youth movement group (YDG-H) in operations carried out in three cities throughout Turkey.

The PKK is recognized as a terrorist organization by Turkey, the United States, and the European Union. Turkey was long plagued by PKK's bloody campaign of terror for Kurdish self-rule in the southeast and killed tens of thousands of people over three decades.