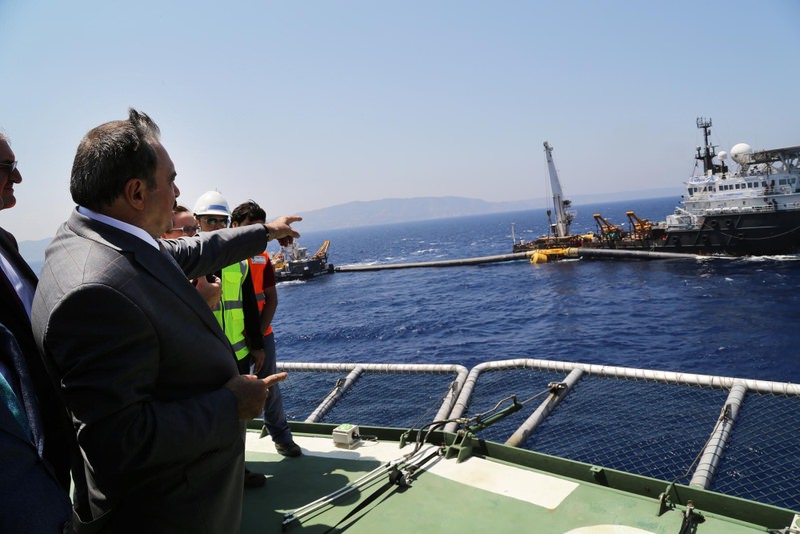 Forestry and Water Affairs Minister Veysel Erou011flu points on the vessel where the last parts of the pipeline were joined together and submerged off the coast of Kyrenia.
by Daily Sabah Aug 08, 2015 12:00 am

The Northern Cyprus Water Supply project as it is officially known, was wrapped up on Friday with the installation of the final part of the pipeline connecting Turkey to the Turkish Republic of Northern Cyprus (KKTC). The project, the first underwater pipeline between the mainland and an island in the world, will address the chronic water shortage Turkish Cypriots have suffered from since the 1950s and is touted as a move to further accelerate the peace process on an island divided between Turkish and Greek Cypriots. It is also the first line physically connecting the territory of Turkey to the KKTC.

Storing water from a river in Anamur, a district in the southern province of Mersin and Turkey's closest province to Cyprus, the pipeline will be a lifeline for nearly 300,000 Turkish Cypriots desperately in need of access to water. Turkish officials had already hinted that Greek Cypriots might benefit from the pipeline as well if peace talks between the two historically divided communities reunify the island.

The 80-kilometer-long water pipeline that cost TL 1.6 billion was developed to transport water from Alaköprü Dam in Mersin. Conceived years ago, the project started in 2011 when the dam's construction started.

For Turkish Cypriots, the pipeline means access to quality water, which will replace calcareous water extracted from underground sources. This is especially beneficial for crops, as the quality of water used in irrigation will improve the quality of crops and help to diversify the Cyprus economy, which is currently largely dependent on tourism revenues.

For President Recep Tayyip Erdoğan, the pipeline may help to boost the momentum in long stalled peace talks, which were recently resumed after a change of administration in the KKTC. Speaking in Cyprus on July 20 at Peace and Freedom Day events, Erdoğan described the project as "water for peace." "This project will establish a new physical bond between Turkey and the KKTC, and we hope that the water Turkey supplies will not be limited only to the north but will give new life to the entire island. We hope it will not only give life to parched soil but to the hearts of people and will be an element of multi-dimensional cooperation between the two sides," he said.

A special technique was used in the project since the pressure level at the bottom of the sea made it impossible to transport water via pipelines. Officials noted that the water would be transported by the pipeline via suspenders installed 250 meters below the sea's surface, not at the bottom of the sea. Possible damage to the pipeline can be detected beforehand and responded to in time thanks to transmitters and sensors, which will be installed on the pipeline.

Turkish and Turkish Cypriot officials inaugurated the pipeline with Turkish Minister of Forestry and Water Affairs Veysel Eroğlu installing the final piece of the pipeline on Friday. Inauguration of the pipeline was originally scheduled for July 20, Peace and Freedom Day in the KKTC, the day Turkish troops landed after a coup on the island engineered by a military junta in Greece to annex the entire island to Greece. However, delays in construction in the winter due to bad weather pushed the inauguration date to August.

Veysel Eroğlu said at the inauguration ceremony that it was a historical day for both countries and related the history of the project. "We initially thought it would be easy to supply water by installing a pipeline at the bottom of the sea but it turned out to be challenging as there were deep spots underneath with a high rate of pressure and the pipes would not endure such high pressure. So, we decided to keep the pipes suspended under the sea," he said.

Eroğlu said the project conducted by state-run Waterworks Authority (DSİ) and private companies was not simply a pipeline and also consisted of drinking water treatment facilities and water tanks in Cyprus. "This is a turning point for Cyprus and a large development project," he said, adding it would help Cyprus to become a hub of food production and exports.

The minister said the pipeline would contribute to the peace process. "We would like to see the talks continue and achieve a solution. The talks will be easier for Turkish Republic of Northern Cyprus if it becomes stronger," he said. On reporters' questions if the water supplies would be extended to the Greek Cypriot part of the island, he vaguely said, "We don't want any being in the world to be deprived of water." The minister noted that it was up to the Turkish and KKTC government to decide on supplying water to the Greek Cypriot side.

Eroğlu said the transmission of water is scheduled for Oct. 29, Republic Day of Turkey.

In the 1990s, Turkey attempted to provide fresh water to the KKTC, which faces sanctions as an unrecognized entity unlike the Greek Cypriot-controlled southern part. A scheme to supply water via floating balloons was shelved after technical difficulties emerged. The new pipeline will provide a reliable source of water for the KKTC. Experts say it will also significantly decrease costs related to water treatment.

The pipeline will also be a test for exporting water to other countries from Turkey. Turkish officials had earlier hinted that the water could be provided to other countries in the region via pipelines, as the country is seeking to expand its soft power.

Under the tenure of the late Prime Minister Turgut Özal, Turkey sought to supply fresh water to countries in the region in the 1980s. The Water for Peace project proposed in 1986 failed to flourish with other countries distancing themselves from the project, which would supply water from rivers in southern Turkey. It was officially launched in 1991 with infrastructure investments to establish pipelines that would supply water from the Manavgat River. However, conflicts in the Middle East hindered the project, which would concentrate on Middle Eastern countries. The need for water or rather cutting the costs of obtaining water remains high in many countries in the region, from Israel to Saudi Arabia, with many countries depending on the treatment of seawater.
RELATED TOPICS