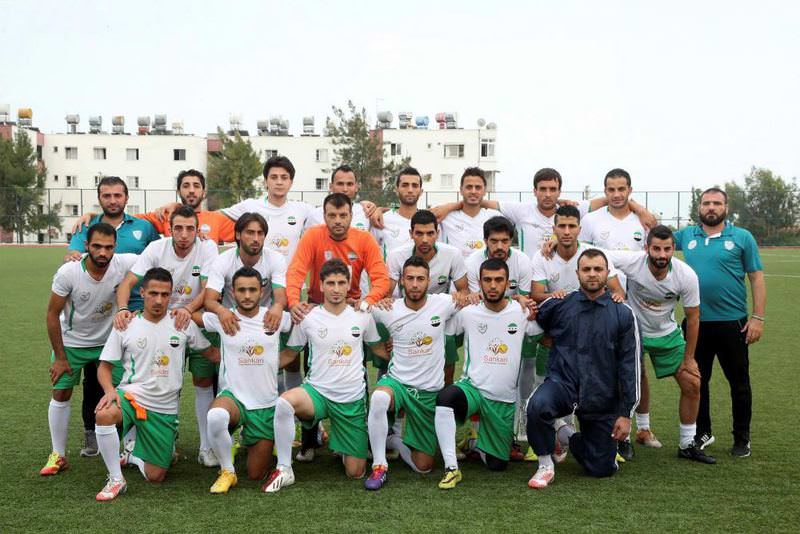 The Syrian ,national team, poses at their training grounds in Mersin.
by Daily Sabah with Wires Aug 10, 2015 12:00 am

Players from the Syrian national football team, who had to flee their country and come to Turkey due to the ongoing conflict, seek help to be accepted as the official national team of the war-torn country

A group of players from Syria's national team applied to international soccer governing body FIFA to seek recognition as their conflict-ridden country's national team. The players continue their sports training in Turkey where they took shelter after fleeing the more than four-year-old conflict.

Turkey hosts more than 1.8 million Syrians who were displaced by ongoing conflict and found safe haven in their northern neighbor. Most are unable to resume their jobs back in Syria but football players are among the lucky few to find an opportunity to continue their careers.

Players were allocated a sports facility in Toroslar, a district of the southern province of Mersin, by the Youth and Sports Ministry. Though they are unable to compete in Turkey, they polish their skills by attending training camps at the facility, far from their homeland where stadiums have been destroyed due to the conflict.

Marwan Mona, coach of the "national team" the Syrian footballers founded in Turkey, said they applied to FIFA to be recognized as the Syrian national team, like the Turkish Football Federation did. "We left Syria because of the war. There isn't a league there anymore and football tournaments are banned. Everywhere is destroyed anyway. The team came to Turkey when Turkey opened its doors to us. We are fine here and don't think about returning to Syria. We have everything here, a place to stay and a place to train. We have nothing back at home. They bombed stadiums and killed players," Mona, who coached a club in Syria's Latakia before fleeing into Turkey three years ago, said.

Mona stressed the team they formed in Mersin includes five players from the Syrian national team and youth national team. They seek to recruit more players but many are still in Syria where they are afraid of traveling to Turkey "because the [Syrian President Bashar] Assad [regime] kills those seeking shelter in Turkey or imprisons families of those who manage to flee," Mona said. Still, about two players arrive almost every month, boosting the team, he added. "We only need 10 more players who are still in Syria. We have 18 players here and they are all very good players," he said.

The team has been training for two months and is gearing up for friendly matches with amateur teams as well as the Turkish league's second- and third-division teams. They are also invited to a friendlies tournament in Istanbul and are looking forward to playing abroad as the new national team of Syria.

It is not clear whether FIFA will accept their bid for recognition as Syria already has a national team competing in international tournaments though it is under the control of the Assad regime who lost most of his allies after he launched the brutal crackdown on the opposition. But Turkey may be a good place to start a new national team, as it is the country with which the Syrian national team played its first international match in 1949, 13 years after it was founded.

Meanwhile, back in Syria, professional sports remain in tatters with many professional players having either left the country or joined the ranks of the rebels fighting the Assad regime. A football federation still exists but the league is often disrupted by the ongoing war, with clubs forced to quit tournaments as their training grounds take hits in the conflict and their coffers quickly running empty in the face of a dwindling economy.
RELATED TOPICS