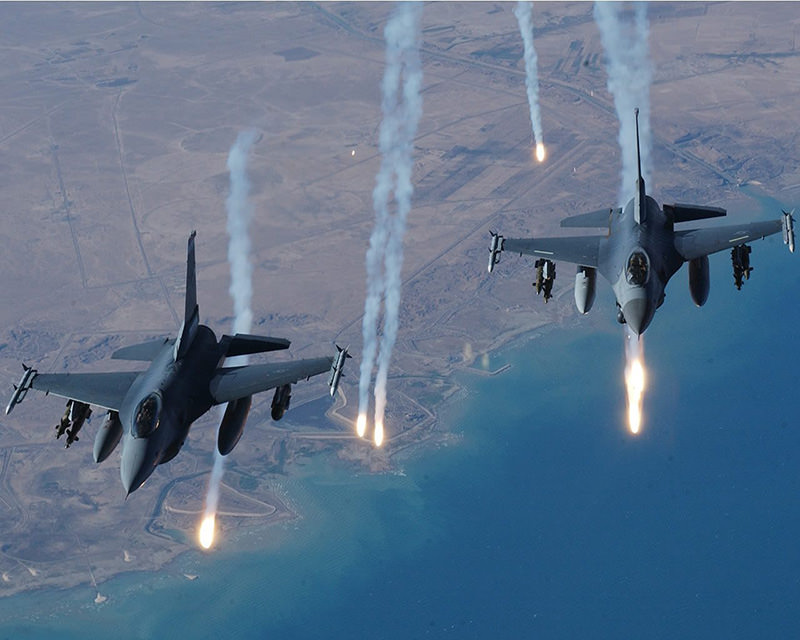 by Daily Sabah Aug 11, 2015 12:00 am
War planes overnight carried out a new wave of airstrikes against PKK targets in the country's southeast, the Turkish Armed Forces (TSK) said on Tuesday. "Seventeen targets of the separatist terrorists were hit with precision and neutralized" in the Hakkari province on the border with Iran and Iraq, the army said.

The strikes appeared to be in retaliation for a succession of PKK attacks in Turkey on Monday that killed six members of the security forces. Turkish war planes have for over two weeks bombed PKK targets in the group's strongholds in the remote mountains of northern Iraq as well as southeastern Turkey.

The Marxist Revolutionary People's Liberation Party-Front (DHKP-C), which the government has on occasion linked to the PKK, claimed another attack in Istanbul, a shooting on the U.S. consulate, which caused no casualties.

In new violence overnight, a Turkish soldier was killed in a gun attack by PKK terrorists on a military post in Şırnak.

Also, an armed conflict between PKK terrorists and security forces broke out early on Tuesday morning on the highway connecting Turkey's eastern district of Doğubeayzıt with the province of Iğdır. Security forces have launched a wide-scale operation in the region with the assistance of helicopters. The highway has been closed to traffic, with locals suffering long traffic jams.

Furthermore, a clash broke out late on Monday between village guards and a group of PKK terrorists trying to infiltrate the village of Elmalı, about 25 kilometers from the center of eastern province Bingöl, in which two PKK members were killed and another two were captured.

One of the captured terrorists was wounded in the clashes and was taken to Bingöl State Hospital, where extensive security measures were taken around the hospital and the nearby premises.

The other captured terrorist was taken to the Provincial Gendarmerie Command for interrogation. Additional troops were dispatched to the village and large-scale operations were launched in the region to capture the remaining members.

Turkey has been hit by violence since a suicide bomb attack by a suspected Islamic State of Iraq and al-Sham (ISIS) supporter killed 32 activists in Suruç on July 20.

The government has intensified its counterterror operations following the recent attacks carried out by the PKK, which is recognized as a terrorist organization by the U.S., the EU and Turkey.

Formed in 1978, the terrorist group fought the government for an independent state until the early 2000's. The group then shifted its goal to autonomy in predominately Kurdish inhabited regions of Turkey.

The PKK announced on July 11 that the cease-fire, which was declared via a message from the PKK's imprisoned leader Abdullah Öcalan in 2013, has ended.