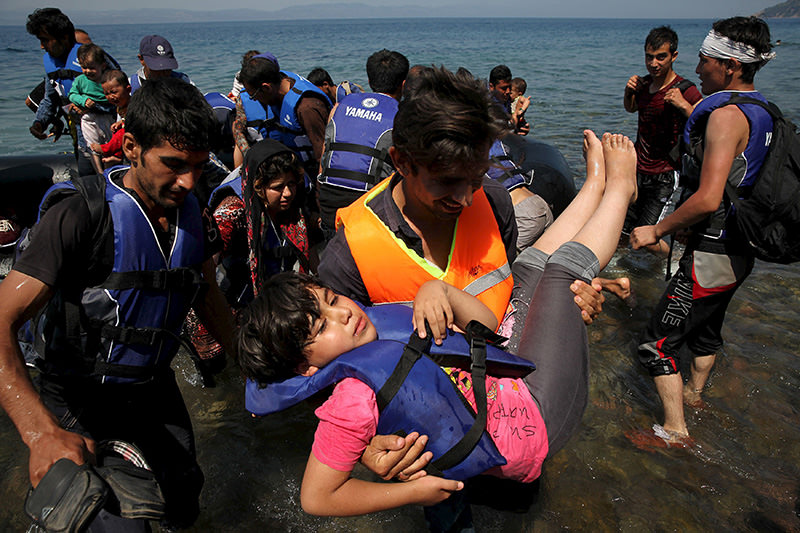 Afghan immigrants arrive in a dinghy on the Greek island of Lesbos after crossing a part of the Aegean Sea between Turkey and Greece, August 6, 2015 (Reuters photo)
by Daily Sabah with Reuters Aug 11, 2015 12:00 am
The Turkish coastguard on Tuesday rescued 330 Syrians adrift in the Aegean Sea after failing to reach Greece, as the number of migrants attempting the treacherous passage to Europe surges.

Members of the group said they had been traveling on eight small boats. They included dozens of children, at least five of them newborn, and women, some of who were visibly pregnant. "We are told Europe will welcome us, but the door is closed in our face," said Abdul, 23, from Damascus. "We will try again every day to reach Greece."

Several of the refugees said their boat had been stopped by armed Greek coastguard officers, who ordered them to dump fuel, stranding them at sea.

A spokesman for the Greek coastguard, Nikolaos Lagadianos, said it "categorically denied" the allegations, saying an incident had taken place off the Turkish town of Bodrum, further south, but that the Greek authorities had not been involved. Crisis-hit Greece has seen a dramatic rise in the number of people seeking refuge.

The United Nations refugee agency said 124,000 had arrived this year by sea and most are traveling to the Greek islands in the Aegean from the nearby Turkish mainland.

Turkey is home to more than 1.8 million Syrian refugees escaping the four-year civil war. One Turkish coastguard officer in the seaside resort town of Çesme in the province of İzmir said his crew had rescued 700 people in the past week, which he said was a record.

"There has been a calamitous increase, and we do not have the resources to meet their needs," the officer said, declining to be named because he is not authorized to speak to the media. Most are refugees from war-torn Syria, but others fleeing hardship and violence in Afghanistan, Iraq and Iran are also filling up the inflatable boats run by Turkish smugglers.

Anadolu Agency reported that over 50,000 illegal immigrants snuck into Turkey or were discovered without residence permits in the past three months, including 30,000 Syrians.

Last year, 15,000 illegal immigrants were intercepted in Turkish waters and the Coast Guard rescued almost all of them as their boats were sinking. Speaking to Anadolu Agency, Mehmet Yegin, an expert from Turkey-based International Strategic Research Organization (USAK), said failure to prevent illegal crossings into Turkey paves the way for a string of problems, particularly the threat of terror.

He also says Turkey needs to draft a clear policy regarding Syrian migrants. "Turkey should have a clear approach on whether it will pursue an open-door policy or a different way," he says. Yegin says though lengthy, Turkey's border with Syria was not impossible to protect against infiltrations, with international support and technology.

"Illegal crossings pose a risk both for Turkey and European countries. Turkey does not have to shoulder the burden of migrants alone. If international support is provided, the Syrian border can be controlled more effectively," he told Anadolu Agency.