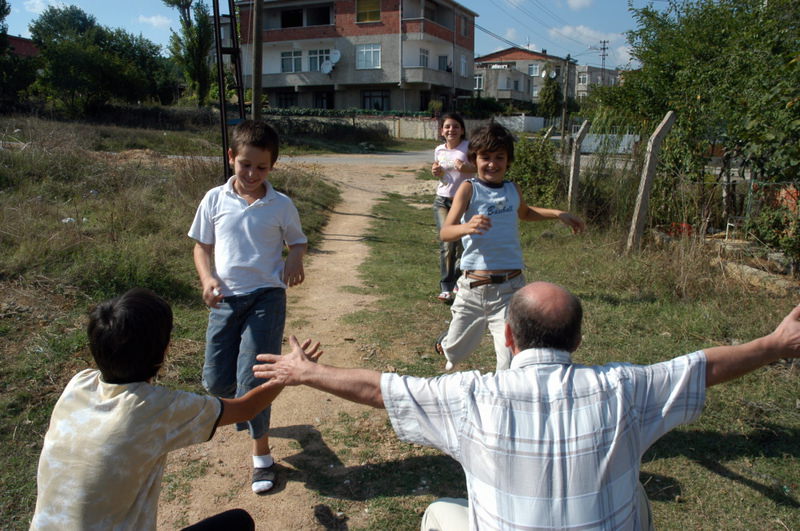 Three children Adem and u015eu00fckriye Nalca had to hand over to social services when they were unable to take care of them due to u015eu00fckriye's illness, reunite with their parents in Istanbul.
by Daily Sabah Aug 12, 2015 12:00 am

Return to Family, a project by the government to subsidize poor families, saw thousands of children reunite with their families who were forced to give them up to social services due to extreme poverty

Social services are often reviled for taking children away from families for trivial reasons, but a project in Turkey is restoring their image and giving children a chance to reunite with their families.

The Return to Family project, initiated by the Family and Social Policies Ministry in 2005, saw 10,762 children returned to their parents who were separated from their children due to the financial difficulties they experienced, which disrupted child care. This is thanks to family subsidies, as Turkey, a country that once suffered from a crumbling social state, looks to improve the status of its social services.

The ministry also provided economic aid to 62,995 children staying with their families in a pre-emptive scheme to decrease the number of children under social service protection due to poverty in their families.

The country has already boosted social aid in the past years, with more than 3 million households benefiting from regular aid.

Turkey seeks to enhance the care for orphaned children and children brought to social services. To that extent, orphanages are being replaced with flats where a small number of children can stay together. The ministry also promotes foster parenting, which, unlike other countries, is not prevalent in Turkey. The number of children staying in orphanages dropped to 12,542 from 14,000, and more than 4,000 of them stay in flats called "houses of love," which are exclusively for orphaned children. Another 13,825 children were put up for adoption as adoption rates are increasing thanks to less red tape concerning adoption procedures. Foster parenting is also flourishing with 4,283 children being placed with foster parents. The rise in the number of foster parents is attributed to a project spearheaded by President Recep Tayyip Erdoğan's wife Emine Erdoğan and sponsored by the government. The Ambassadors of the Heart project was launched in 2012 to motivate families to be foster parents in Turkey and for Turkish children abroad, including orphans and children from dysfunctional families with divorced parents.

Apart from children from impoverished families, there are plans for children from families "at risk" to be monitored by the Health Ministry. Every child brought to clinics for compulsory vaccinations up to the age of 6 will be monitored to see if they are subject to violence or abuse. Families bringing their children to Family Health Centers will be interviewed about the child's nourishment, sleeping habits and the physical and psychological development of the children. Parents will also be asked about drug use and cigarette and alcohol consumption to determine whether the children may be subject to abuse and violence by intoxicated parents.
RELATED TOPICS