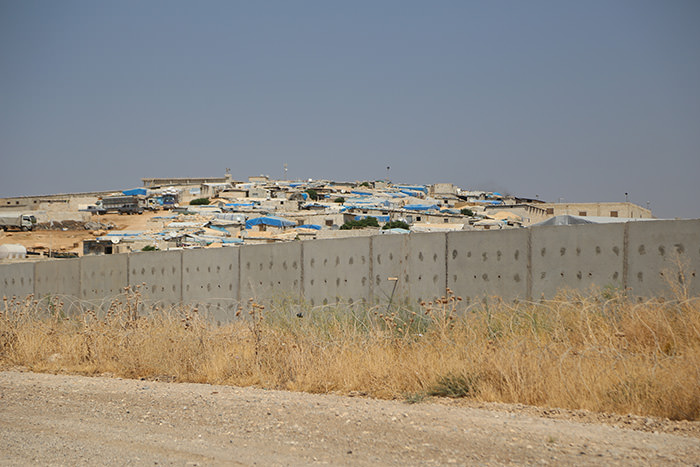 |AA Photo
by Anadolu Agency Aug 13, 2015 12:00 am
Turkish authorities are putting up a concrete wall along the country's border with Syria after the recent wave of terrorist attacks hitting the southern border regions.

The construction in the Reyhanlı district of Hatay province comes as part of the tightened security measures along the border following a series of terrorist attacks starting with the Suruç suicide bombing on July 20 that killed 33 people, and with at least 33 security force members and 12 civilians killed since.

The Hatay Governorate and the 2nd Border Regimental Command are cooperating to erect a 3-meter concrete wall in Reyhanlı's Bükülmez neighborhood, just across from the town of Atme in Syria.

According to Anadolu Agency, the 2-meter-wide concrete blocks weighing 7 tons each are being aligned on the border with a crane.

The wall, which will stretch 8 kilometers, will be completed soon.

Since July 24, around 1,700 people have been detained in a wave of counterterrorism raids, amid a spike in attacks targeting police and the military after a deadly suicide bombing July 20 in the southeastern town of Suruç, which killed 33 civilians.

The attacks have since led to an extensive counterterror effort by the government, which had warplanes bomb PKK camps at home and in northern Iraq, including the Qandil Mountains, along with airstrikes on ISIS positions in Syria.
Last Update: Aug 13, 2015 4:08 pm
RELATED TOPICS