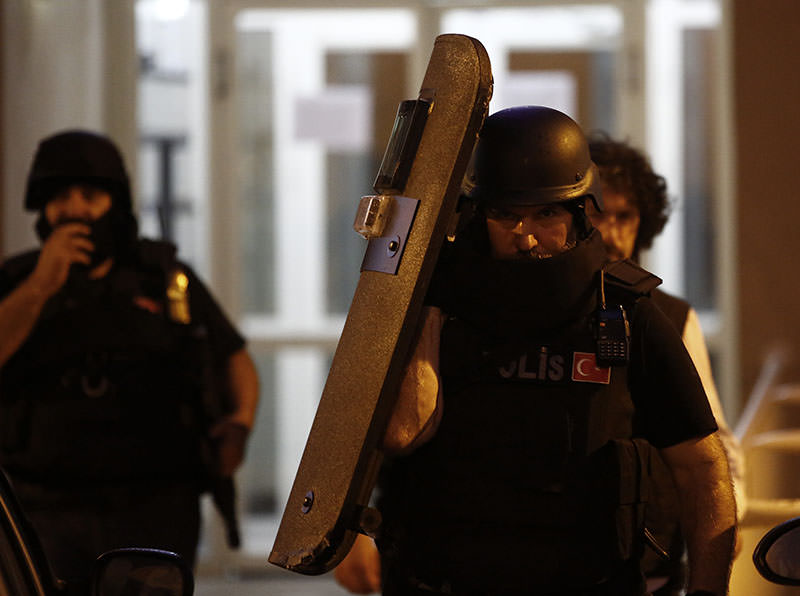 | AA photo
by Daily Sabah with Wires Aug 15, 2015 12:00 am
Turkish police on Saturday have detained 15 PKK-linked suspects and confiscated weapons and substantial amount of organizational documents in a simultaneous dawn anti-terror operation conducted at 13 locations in Istanbul.

The suspects were allegedly planning to carry out actions of terror on Istanbul streets before their detention and were going to throw Molotov cocktails at public buildings as well as police vehicles.

An explosives-laden van was detonated outside a gendarme station near the village of Kaynarca, just to the south of Lake Van, at around 5 a.m. (0200GMT) causing slight injuries to the gendarmes, the office of Bitlis provincial governor said in a statement.

In another attack, a gendarmerie station in nearby Cevizyatağı was targeted with rockets and small arms fire. A third incident occurred when a rocket was fired at an armored police vehicle in the Tatvan district. There were no reported casualties from either incident.

To the north, in Erzurum province, a police station in Pasinler district was also attacked with rockets and small arms. Again, there were no reported casualties.

The incidents follow a deadly attack on Friday night in southeastern Hakkari province that left three soldiers dead and six wounded, according to the Turkish military.

Around 40 security forces personnel have been killed since the PKK - designated a terrorist group by Turkey, the EU and U.S. - renewed its armed campaign following the July 20 Suruç bombing.
Last Update: Aug 15, 2015 1:51 pm
RELATED TOPICS