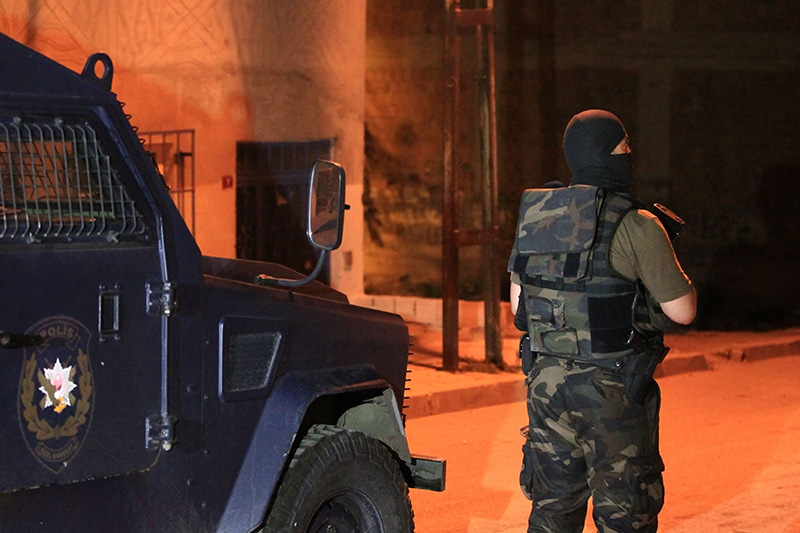 |AA Photo
by Daily Sabah with Agencies Aug 16, 2015 12:00 am
Counter terrorism teams of the Istanbul Police Department have raided various addresses linked to the PKK terror organization in Istanbul's Esenyurt district at around 05:00 am on Sunday.

The detained suspects were interrogated after being held for medical inspection at the Haseki Training and Research Hospital.

Meanwhile, a Turkish soldier was killed and another soldier was injured after a mine, planted by the PKK terror organization, exploded early Sunday in Turkey's south-eastern Kars province.

The injured soldier was immediately taken to the Kars state hospital for medical treatment.

In a statement on its website, the Turkish Armed Forces said the clash happened at 5.30 a.m. local time (0230GMT). The soldiers called on the insurgents to surrender but were fired upon. The military said the fatal army casualty died from his wounds in hospital.

Saturday marked the 31st anniversary of the start of the armed conflict between PKK terrorists and Turkish army.

Authorities in the town of Varto in Muş province ordered a total curfew, worried that the PKK had laid explosives there to coincide with the anniversary.

The flare-up in violence has killed 43 members of the security forces, according to the government. Turkish media have put the PKK's death toll at more than 200.

In Diyarbakır, in southern Turkey, police seized improvised explosives and Molotov cocktails in an operation on Saturday evening against the suspected members of the Patriotic Revolutionary Youth Movement (YDG-H), the youth wing of the PKK that is active in Turkey's cities. A suspected YDG-H member was arrested.

In a separate incident, a police officer was injured in an explosives attack on the offices of the Justice and Development (AK) Party in the city later on Saturday.

Police sources told Anadolu Agency that two devices were thrown at the building, one of which detonated, wounding the officer.

Muhammed Akar, the party's provincial chairman, visited the officer in hospital before he was discharged from the hospital.