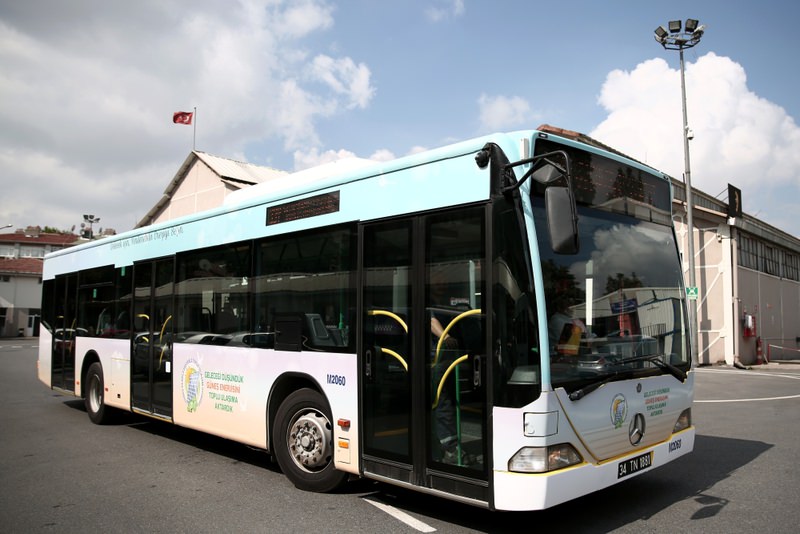 The bus is fitted with 15 solar panels on its roof and is the first member of u0130ETT's solar-powered bus fleet, which will expand in the near future.
by Daily Sabah with IHA Aug 20, 2015 12:00 am

The bus is the first of its kind to be used in mass transit in the country, which seeks to increase its renewable energy use and has an annual solar power capacity of 380 billion kilowatt hours, one of the highest in Europe.

İETT officials demonstrated the bus to the media at a bus depot in the Topkapı district, the first station for the bus's route, which will continue on to Eminönü, a busy commercial hub in Istanbul's historic peninsula dotted with landmarks such as the Blue Mosque and Hagia Sophia.

Fitted with 15 solar panels on its roof, the white bus with the slogan "We thought of the future and used solar power in public transportation" inscribed on its sides, took its first passengers to Eminönü.

Fatma Nur Yılmaz, an İETT official, told reporters at the unveiling event that the world is already using solar power in transportation, especially in vehicles capable of operating over long distances, but it was the first time solar power is being used in city mass transit where speeds and operation of buses greatly vary due to traffic. Yılmaz said the bus had an environmentally friendly engine and they sought to boost awareness to renewable energy use.

Although the bus runs on gasoline, the solar panels cover almost every energy need of the bus like powering information screens, cellphone charge units, Wi-Fi connection, loudspeakers, cameras and electronic ticket units. They also provide additional power for the bus's battery and contribute to fuel efficiency. More importantly, the bus does not pollute the air as it does not have carbon monoxide emissions, İETT officials said.

Elif Özdemir was one of the first passengers on the bus. "We need more projects like these. People have difficulty breathing because of high carbon monoxide levels. I think this bus will prove beneficial, especially in Istanbul's heavy traffic," she said.

Selim Özkul, another passenger, said buses can also be used in other cities as Turkey has fairly sunny weather.

Public transport serves more than 14 million people in Istanbul, Turkey's largest city, which also has the notoriety of having the worst traffic in the world according to a study sponsored by a leading electronic navigation company with travel times for even short distances taking up a few hours in rush hour. Add to this the carbon monoxide emissions from vehicles in traffic - over 3.5 million according to latest statistics - and transportation deals a serious impact on the environment. The İETT already introduced another environmentally friendly bus last year. Botobus, a "botanic" bus, running between Edirnekapı and Taksim, with plants on its roof to help to offset the carbon emissions the bus generates.
Last Update: Aug 20, 2015 4:36 am
RELATED TOPICS