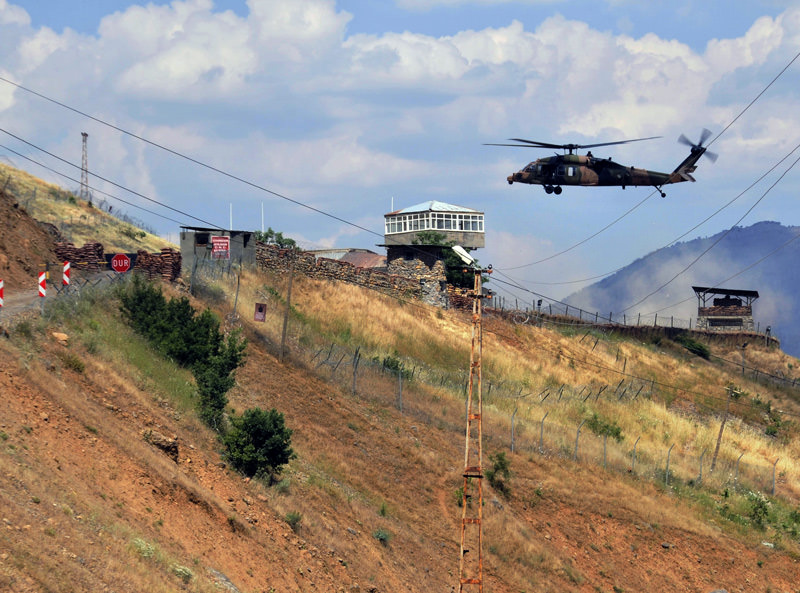 by Daily Sabah with AA Aug 20, 2015 12:00 am
At least 10 suspected PKK terrorists have been killed in clashes with security forces in southeastern Turkey, security sources said Thursday.

Security sources said dozens of troops and special forces, supported by drones, engaged in the firefight in Adıyaman province. Two soldiers were slightly injured in the operation, the sources added.

Eight terrorists were killed after an anti-terror operation on Thursday in the southeastern town of Şemdinili, located in the Hakkari province. One of the terrorists that has been killed is believed to be behind the death of Specialized Sergeant Ziya Sarpkaya of the Turkish Military.

Nationwide operations, focusing on terrorist groups that include the PKK, DHKP-C and the Gülen Movement, are currently ongoing in the region.

PKK terrorists were opening ditches in roads in order to prevent military vehicles from passing six days prior to the counter-terror operation held in the southeast of Turkey.

Operations against the PKK - considered a terror group by Turkey, the EU and U.S. - came after it renewed attacks on Turkish security forces following the July 20 Suruç bombing.

Around 50 police and soldiers have been martyred in attacks attributed to the insurgents while hundreds of alleged PKK members have been killed.

The Turkish Air Force also carried out an air operation against the PKK late Wednesday after eight soldiers in the province of Siirt were killed. Turkish jets bombarded PKK camps in the Karaçalı area near the Turkish-Iraqi border.

At least 440 suspected PKK militants have been killed and 400 others have been injured in operations carried out by Turkish security forces between July 7 and August 17, figures compiled by Anadolu Agency have revealed.

Meanwhile, Turkish police have detained more than 40 suspects linked to the People's Liberation Party-Front (DHKP-C) terrorist group in early morning operations on Thursday launched in Istanbul and the southern province of Mersin.

In Istanbul, the police operation took place in the Sarıyer district of the city's European side.

The DHKP-C has been targeted a day after police detained two suspects who attacked a security post near Istanbul's Dolmabahçe Palace on Wednesday.

Police said the two detained suspects are believed to be DHKP-C members. The organization had also claimed responsibility for an Aug. 10 gun attack on the U.S. consulate in Istanbul.

Since July 24, well over 1,000 people have been arrested in a wave of counter-terrorism raids amid a growing number of attacks targeting Turkey's police and army.