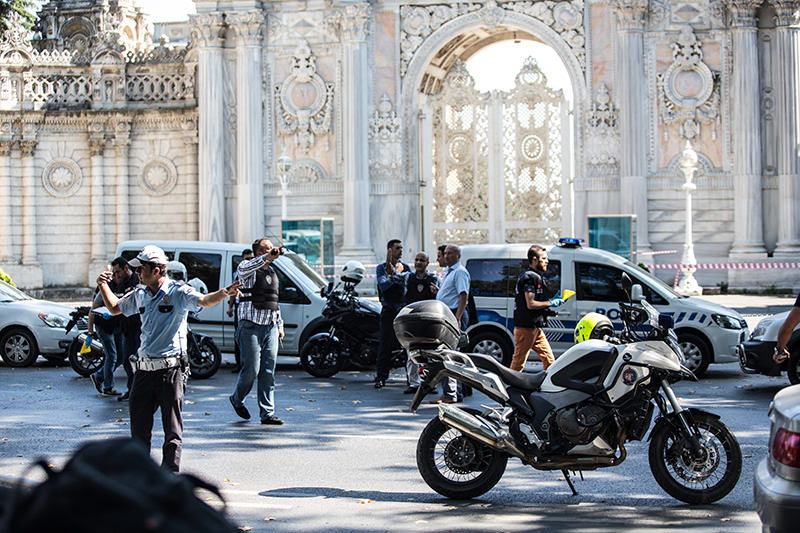 |AA Photo
by Daily Sabah Aug 22, 2015 12:00 am
Police have arrested on Saturday two terrorists who attacked a police post on August 19 at the entrance of Dolmabahçe Palace, popular with tourists and home to the prime minister's Istanbul offices.

The arrest warrant was issued today, after the attackers stood on trial at the Istanbul Çağlayan Courthouse.

The two assailants, who attacked with automatic guns and explosives, were captured and detained by the police close to Taksim square shortly after the attack.

Police earlier said that one of the suspects had previously been arrested during operations against the Revolutionary People's Liberation Party-Front (DHKP-C) terrorist group in 2010 and 2013, whereas the other assailant was arrested in 2010 and 2011.

The DHKP-C terror organization is an offshoot of a Marxist-Leninist movement that was established in the 1970s. The DHKP-C was founded in the 1990s after it splintered from a larger group of far-left organizations responsible for a string of attacks that include the assassination of two politicians in 1980, several intelligence officials and prominent businessman Özdemir Sabancı.

It kept a relatively low profile for many years and its attacks were relatively minor compared to the PKK, another terrorist organization active in Turkey. It however stepped up its attacks over the past two years. In 2013, a DHKP-C militant carried out a suicide bombing at the U.S. Embassy compound in Ankara, killing a Turkish security guard.
Last Update: Aug 22, 2015 6:51 pm
RELATED TOPICS