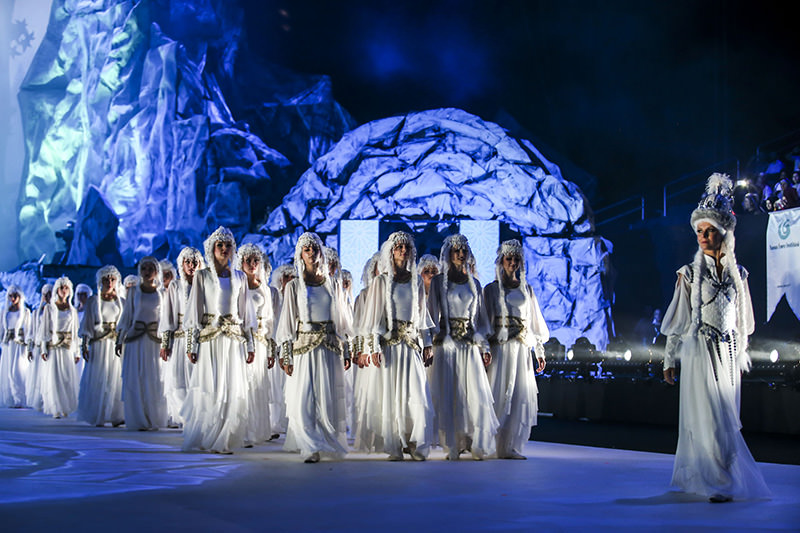 by Mehmet Çelik Aug 22, 2015 12:00 am
Turkey's international culture and education organization, Yunus Emre Institute, on Saturday celebrated the end of its sixth Turkish Language Summer school, which hosts around 500 foreign students from 38 different countries in various cities of Turkey, with "The Voice of 1000" Years: Turkish Language Festival" in Istanbul.

The festival, which included various dance, music and theatrical performances by the students who learned Turkish at the summer school, was attended by President Recep Tayyip Erdoğan, ministers and other diplomatic guests from Turkey and abroad.

Held for the sixth time since it was initiated by Yunus Emre Institute, Turkish Language Summer School currently hosts around 500 attendees from 38 countries in various cities of Turkey, who are visiting Turkey to learn Turkish.

Speaking to Daily Sabah, Yunus Emre Institute's Cultural Centres Coordinator, Associate Professor Mustafa Balcı, emphasized the importance of the language programs for their role in Turkey's increased 'soft-power' throughout the world, particularly in the Middle East and the Balkans.

"Yunus Emre Institutes, which were established in 2007, has been actively continuing its projects since 2009 in 34 countries with its 42 cultural centres. These culture centers have two roles: one two teach Turkish abroad and promote Turkish culture and arts. In a way these centres have been given a role in carrying Turkey's cultural diplomasi," Balcı said.

The Yunus Emre Institutes and language programs have been also Turkey's force as a diplomatic competitor in grounds of cultural diplomacy around the world, Balcı added.

Moreover, Balcı said that there has been a high demand for language courses and people have been curious about the Turkish culture in recent years, as it has been a rising power in its region.

"Yunus Emre Institute's language programs help many of the students to re-establish ties their relatives who speak Turkish, find jobs, and add a new color to their lives," Balcı also said.

The students who participated in the Turkish Language Summer School have expressed their fascination with Turkey and said that they are glad they could continue their Turkish language journey in Turkey which they started in their home countries. Students have been particularly impressed with the Turkish cuisine and touristic sites they have seen during the visit.