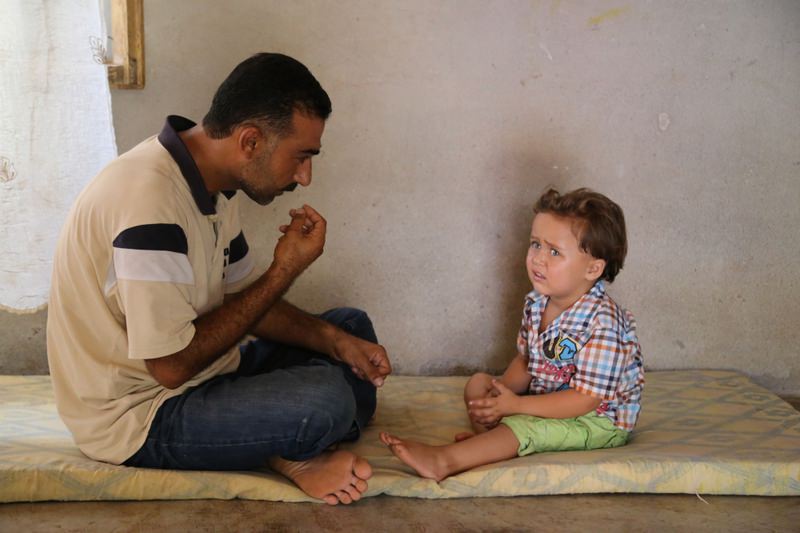 Yusuf with his hearing-impaired nephew Adnan Vail. The young boy living in an underfurnished house with his uncle's family hopes to hear again with a new hearing aid.
by Daily Sabah with AA Aug 25, 2015 12:00 am

Adnan Vail, a three-and-a-half-year-old Syrian boy, survived two barrel bomb attacks by the Assad regime but lost his family and hearing. He took shelter in Turkey with his uncle who appeals for help to buy a new hearing aid for the boy

Adnan Vail, a young boy from Syria residing in the southern province of Hatay with his uncle, looks forward to hearing again after a barrel bomb attack by the forces of Syrian President Bashar Assad left him hearing-impaired and killed his family. The boy's uncle is appealing for the donation of a hearing aid to the boy.

Vail was born into a war in his country that pitted rebels against the Assad regime. The three-and-a-half-year-old boy from Hama saw the brutal face of the war when barrel bombs were dropped on their neighborhood by Syrian army helicopters, which killed his parents and rendered him deaf. His grandmother took him in but the barrel bombs, that killed at least 177 people alone in August, struck again and destroyed the house in which he stayed. His grandmother was killed in that attack and the young boy was taken by his uncle to Turkey, home to more than 1.9 million Syrians who fled the brutal war. But Adnan's plight of losing his loved ones did not end there, and the uncle who took him to safety in Turkey soon died of cancer. Vail now lives with Yusuf, another uncle and his only surviving relative, in Reyhanlı, a Turkish border town in Hatay where thousands of Syrians live. Yusuf is a father of six and gladly accepted the young boy as his seventh child, but the family lives in poverty in a small house and cannot afford to buy a hearing aid for the boy. "I am doing all I can for my nephew. He grew up amid sorrow. I tried to get him treated in Syria, in clinics in Idlib and Damascus, but did not have enough money for his complete recovery," Yusuf said, desperately describing how he cannot "do anything for him."

The uncle could only afford to buy one hearing aid for the boy, but the device turned out to be faulty.

Vail, wearing a sad expression all the time, wants to hear others and hopes a new hearing aid will solve his problem. "He wakes up crying sometimes. He is always sad because he can't join other children playing. I want him to hear more than anything. He is the only person alive from my family," said Yusuf, who lost all his relatives in the past four years since the conflict broke out in Syria.

The conflict in Syria affects Syrian children the most, as they are left to fend for themselves when their parents and relatives are killed in the attacks. Those like Vail are taken by surviving relatives while Turkey provides shelter for a number of Syrian orphans at special facilities set up in camps for displaced Syrians.

According to UNICEF figures, 54 percent of all Syrians who fled into Turkey are children, a percentage roughly corresponding to 900,000 children.

Turkey began taking in thousands of war-torn Syrian refugees who fled the violence that surfaced in 2011 and continued apace with the rise of the Islamic State of Iraq and al-Sham (ISIS) in their native land.
RELATED TOPICS