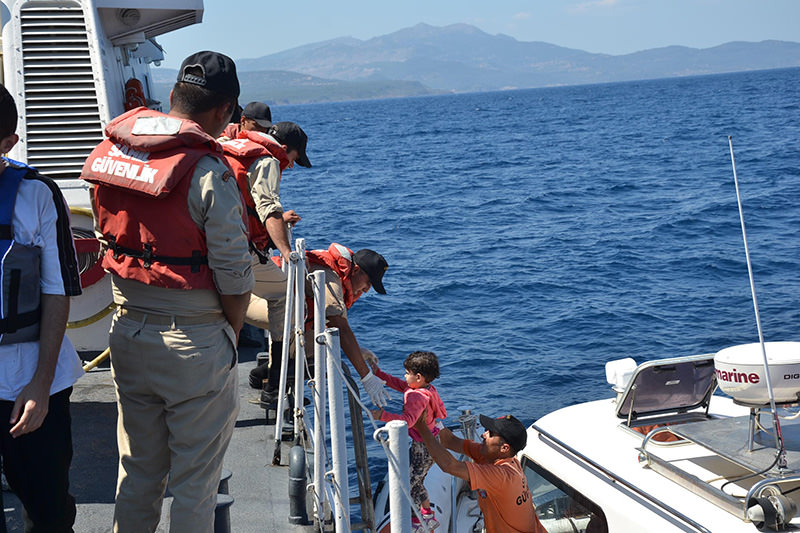 | DHA Photo
by Daily Sabah with DHA Sep 01, 2015 12:00 am
The Coast Guard rescued 48 illegal immigrants after six boats they boarded started sinking off the southwestern Turkish coast on Tuesday. Immigrants said they were given the boats by smugglers who arranged their trip to the Greek islands.

The Coast Guard rushed to help migrants aboard six boats who phoned the military branch when their boats started taking water and their engines broke some 500 meters off the coast of Bodrum, a southwestern Turkish vacation resort. Migrants from Syria, Afghanistan, Pakistan and Myanmar were taken aboard a Coast Guard boat after they were rescued from certain death.

Harzai Sana, one of the migrants who was traveling with his wife and two children from Syria's Aleppo to Europe, said he and others came to Bodrum from Istanbul by bus in order to cross into Greece. "We paid $3,000 to smugglers to buy the boats. There were seven to eight people aboard. [Smugglers] helped us start the engine and set sail, but the engines broke down when we sailed. We tried to paddle back to the shore but we were very scared when the boats started taking water," Sana said.

Meanwhile, 18 migrants on two other rubber boats traveling together with rescued migrants, managed to reach the Greek island of Kos. Kos is among the islands of Greece dotting the Aegean Sea where the Greek coast guard said nearly 1,200 migrants were picked up from the sea between Monday and Tuesday morning, a figure unusually high compared to the few hundreds that are normally picked up.

Greece, the nearest gateway to Europe for illegal immigrants who flock to Turkey in pursuit of a better life in European countries, is coping with a record number of migrants arriving daily on its islands that are in close proximity to the Turkish coast.

Not every migrant is able to arrive on an island. Often traveling in unsafe, overcrowded boats, migrants risk death, as boats tend to capsize in bad weather. The Coast Guard, which stepped up operations this year in the face of the influx, intercepts many and rescues those struggling to survive after their boats capsize.

Every day, hundreds wait in seaside towns on the Aegean coast, a more than 2,600-kilometer-long coast stretching from Çanakkale in the north to Muğla in southwestern Turkey. At night and sometimes in broad daylight, they hop on dinghies arranged by smugglers to travel to Greek islands.