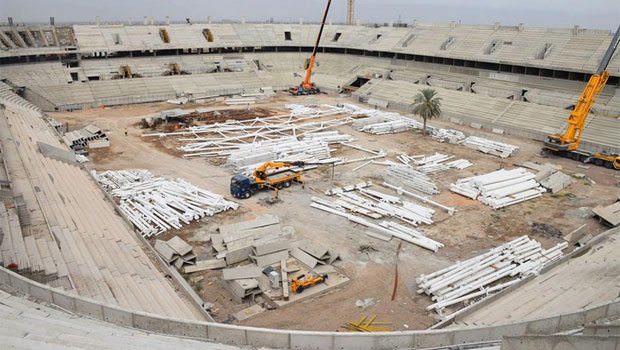 Bilgiç underlined that the workers, who were contracted by the Turkish Nurol Construction Company to build a sports complex in the eastern Baghdad district of Sadr City, were specifically targeted for being Turkish nationals. It has further been confirmed by ministry officials that out of the 18 people kidnapped, 14 are workers, three are engineers and one is an accountant from the company.

Speaking to the media on Thursday, Bilgiç said that Ankara has taken necessary steps to rescue the workers and that the ministry is in touch with Iraqi officials for further cooperation. In addition to Bilgiç's remarks, Deputy Prime Minister Numan Kurtulmuş said that Iraqi authorities do not have any information as to how and who conducted the kidnapping. Kurtulmuş assured that Ankara is devoting all efforts to rescue the workers and confirmed that the government is in close contact with Iraqi authorities regarding the incident.

Though neither the identity nor motives of the kidnappers are known, the incident brings to mind the raid that occurred on June 11 last year, when 49 Turkish hostages including diplomats, consular officials and their families were kidnapped from the Turkish Consulate in Mosul by Islamic State of Iraq and al-Sham (ISIS) militants, a day after the terrorist organization took control of the city.

The kidnapping of the Turkish workers on Wednesday, the shooting and killing of one Turkish soldier from across the border in Syrian territory held by ISIS in Turkey's southern Kilis province and another Turkish soldier reported missing on Tuesday, occurred shortly after Turkey recently began airstrikes against the terrorist group in northern Syria and allowing U.S. warplanes to use bases in southeastern Turkey to launch strikes on the militants.

Officials said the kidnappers stormed the construction site at dawn on Wednesday while the workers were sleeping in caravans and took them away in several SUVs. The officials spoke on the condition of anonymity because they were not authorized to speak to the media.

People dressed in military uniforms broke down the door at 3:00 a.m. local time and abducted the Turkish citizens. Neither the identity nor the motives of the kidnappers were immediately known. There were no reports of violence.

Turkey recently began launching airstrikes on ISIS positions in northern Syria and has allowed U.S. warplanes to use bases in southeastern Turkey. Bilgiç said that Turkey will continue its devoted efforts to combat ISIS and that the joint operations with the U.S. will also continue. Providing the latest numbers for Turkey's continuing efforts against preventing foreign fighters entering the country, Bilgiç said Turkey has given exclusion orders to nearly 20,000 individuals through the intelligence shared with the government. In late June the official number of those who were deported from Turkey was 1,350. The Foreign Ministry announced on Wednesday the recent number as being more than 2,100 people. In addition, officials said that through a risk analysis system for spotting potential foreign fighters at airports, out of 3,700 foreigners more than 1,400 have been banned from entering Turkey.

The style and scale of Wednesday's kidnapping harkened back to the sectarian violence in Baghdad in 2006 and 2007 when Sunni and Shiite militants kidnapped followers of the other sect. In most cases, the bodies of those who were kidnapped were found a day or two later with marks of torture and bullet wounds to the head.

Baghdad has been beset by violence for over a decade now, with roadside bombs, suicide attacks and assassinations almost becoming daily occurrences. While kidnapping for ransom has continued, abductions on the scale seen on Wednesday have been almost unheard of in the past few years.