Four Syrians charged in Turkey over deaths of 12 people, including Syrian toddler 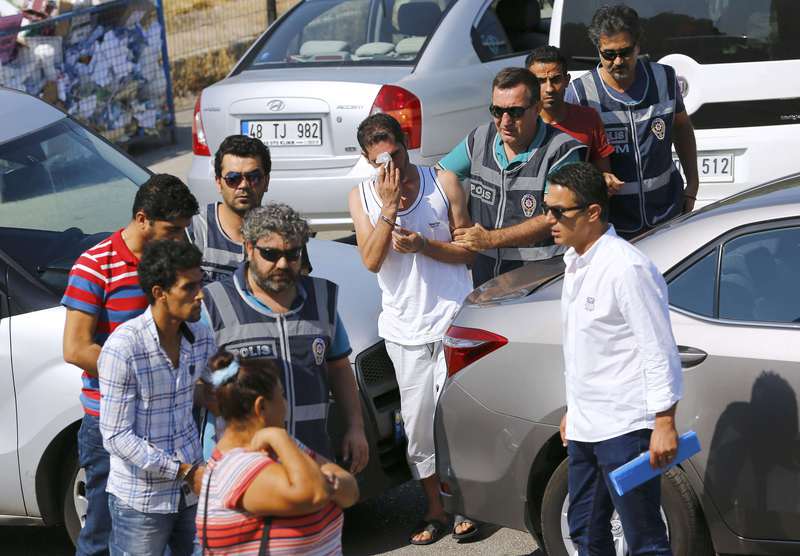 by Daily Sabah with Reuters Sep 04, 2015 12:00 am
A Turkish court on Friday remanded in custody four Syrians, who are suspected of acting as intermediaries for illegal migrant crossings, after a prosecutor charged them over the deaths of at least 12 people, including a 3-year-old boy, whose boat capsized as they tried to reach the Greek island of Kos.

Prosecutors charged the Syrians with smuggling migrants and causing multiple deaths by "conscious negligence" in connection with the drowning of the group after it set off from the Turkish resort peninsula of Bodrum.

The picture of the drowned boy washed up on the beach in Turkey swept across social media and sparked outrage at the perceived inaction by developed countries to address the migrant crisis.

The Syrian boy has been identified as 3-year-old Aylan Kurdi, whose 5-year-old brother Galip and mother Rihan died on the same boat.

In a statement to police, Abdullah said he had twice paid smugglers to take him and his family to Greece but their efforts had failed. They had then decided to find a boat and row themselves but it began to take in water and when people stood up in panic, it capsized.

Though Turkey has a land border with two European countries, Bulgaria and Greece, the sea route is closer for refugees who flock to the country's 2,600 kilometer-long Aegean coast stretching from Çanakkale in the north and Muğla in the southwest, the two most popular provinces among migrants for their proximity to Greece. Refugees are those either already living in Turkey, often in impoverished conditions or those who use Turkey as a path to Europe, traveling from the country's southern border, which is hundreds of kilometers away from the Aegean coast.

Refugees contact smugglers through social media networks according to media reports. They bargain on the costs and negotiate possible routes for travel to Europe. Several social media accounts operated by smugglers inform migrants on where to stay temporarily while in Turkey, how boats operate and where to stay once they reach the Greek islands. Some smugglers also post messages promising to help forging fake passports for refugees.
Last Update: Sep 04, 2015 9:39 pm
RELATED TOPICS