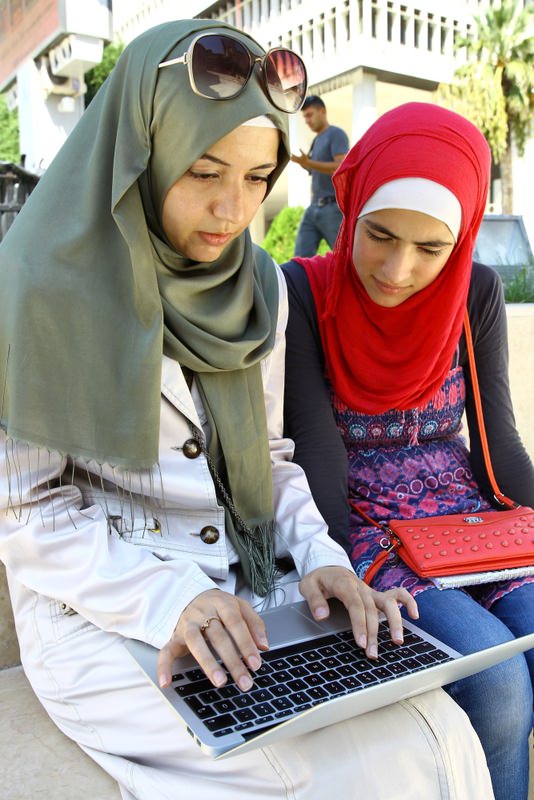 u0130zmir has become a hub for Syrian refugees who spend days in parks awaiting to board boats to Greek islands. Savsan Atrash (L, with green headscarf), aided by Sham Hajar, extends a helping hand to fellow Syrians in the city.
by Daily Sabah with AA Sep 08, 2015 12:00 am

Savsan Atrash, a Syrian woman who fled the war, helps fellow Syrians adapt to life in Turkey through her social media group that tries to stop them from taking deadly trips from Turkey to Greece

Every day, scores of Syrians attempt to cross to the Greek islands from the Turkish coast in rickety boats, risking their lives en route to Europe. Savsan Atrash, a Syrian woman living in the western Turkish city of İzmir, has orchestrated a campaign to aid Syrians in Turkey so that they stay instead of taking a potentially deadly sea journey.

Atrash, who fled the ongoing war in her homeland and lives in İzmir, a popular destination for Syrian refugees seeking to board boats to Greece, is among the founders of a social media group to help Syrians. Her brother died while trying to make the trip and said he "wouldn't have died if he were aware of the dangers of the trip."

"We came to İzmir two years ago with my brother. He was looking to travel to Europe where he would study medicine like he did in Syria. He was encouraged by [refugees traveling by boat], but he drowned. I was devastated," she said. Atrash said her brother was a victim of circumstances as he believed he had no future in Turkey and he was misinformed about the boat trips. "Now I work to stop other people from ending up dead like my brother," she said. Syrians who do not speak Turkish are often dependent on fellow Syrians with a good command of the language. The Internet, especially social media, is their gateway to information in a country they are not familiar with.

The plight of refugees departing Turkey's Aegean coast where İzmir is also located was highlighted with the drowning death of Aylan Kurdi, 3, a child from Kobani, Syria who was traveling to a Greek island from southwestern Turkey's Bodrum with his family. Aylan and his 5-year-old brother Galip drowned along with their mother while his father survived. An image of the boy whose lifeless body washed ashore sparked a renewed call to Europe to admit more refugees. Atrash says the whole world sympathized with Aylan but she did not want other boys to die like him so she works to contact more Syrians to prevent them from being persuaded by human smugglers to undertake the dangerous journey.

In her social media group, Atrash informs Syrians, especially those in İzmir, on where to live in Turkey, where they can get medical aid and how they can learn Turkish, three main problems for Syrians in the country, whose numbers amount to more than 1.9 million.

The young woman already recruited a younger volunteer to help her. Sham Hajar, 13, who met Atrash on social media, helps fellow Syrians learn Turkish, which she quickly acquired during her stay in the country. "I help people not familiar with the city and show them the places they can shop, hospitals and other places," she said.

According to the International Organization for Migration (IOM), at least 2,636 people died in attempts to cross to Europe on the Mediterranean this year and over 332,000 migrants managed to reach Europe, including more than 218,000 who reached Greece and over 111,600 who reached Italy. In the last week of August, 2,164 migrants, mostly from Syria where a four-year-old civil war rages on with no end in sight, were intercepted by the Turkish Coast Guard in the Aegean Sea. Statistics show a dramatic increase in the number of migrants. Last year, over 12,000 migrants were intercepted, while 42,126 were stopped in the first eight months of 2015.

Migrants risk their lives aboard overcrowded dinghies to reach islands dotting the Aegean Sea, the main gateway to Europe for those from Syria and Asian countries by sea. They pay at least $1,000 to smugglers to arrange a trip that often ends up being intercepted by the Coast Guard or at the bottom of sea.
RELATED TOPICS