Flag sales on the rise as terrorism fuels patriotism 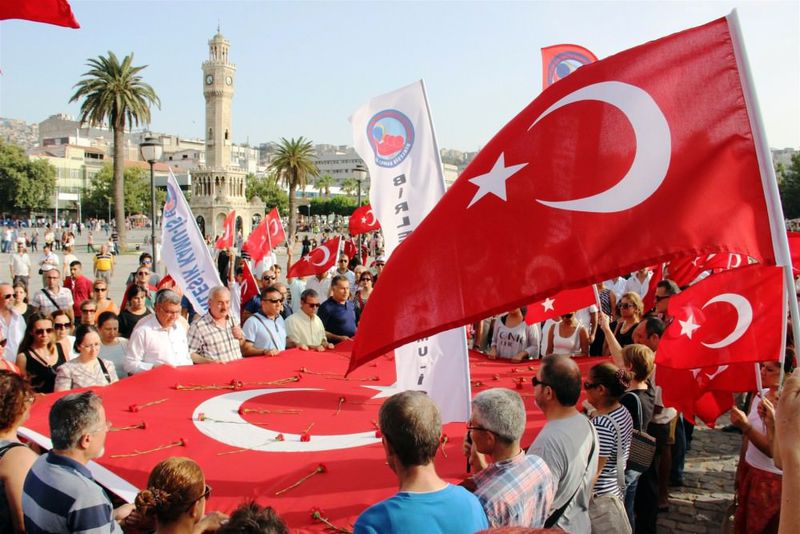 by Daily Sabah with IHA Sep 11, 2015 12:00 am
Flag sellers in Turkey, plagued by a wave of terror since July, are collecting a bittersweet profit from rising patriotism. With rallies against terrorism becoming commonplace, more people buy flags, either to carry during the rallies or hang outside their houses in a showing of solidarity.

In the western city of İzmir, businesses selling flags say they are running out of stocks due to such high demand. Flags line the shelves of Talat Cin's shop and are sold at prices varying between TL 2.5 ($0.82) and TL 30 ($9.86). He notes a considerable surge in sales, though he expresses he is not completely happy because he is aware why the flags are sold. "If only terrorism ended and we would sell less flags. Terrorism hurts everyone; it is a dirty war. We are very sorry for the losses," he said.

Since July, when the terrorist organization PKK announced it would resume its activities after a long lull thanks to a government-sponsored reconciliation process, dozens of soldiers, police officers and civilians were killed in the country's southeastern and eastern cities. With the death toll rising, especially after the killing of 16 soldiers in in Hakkari province and 13 police officers in Iğdır province earlier this week, counterterror protests escalated across the country. Thousands took to the streets since the two attacks by the PKK, waving Turkish flags and shouting slogans against the terrorist organization in rallies. The flag symbolizes the country's unity as the PKK claims to pursue self-rule for Kurds in southeastern Turkey and, the crescent and star is a common sight at rallies.

Erdinç Dinçer says his flag sales tripled since the beginning of this week after the mass killings of soldiers and police officers in bomb attacks. "We certainly want to sell flags but we wish it wouldn't be for this reason," Dinçer said.
RELATED TOPICS