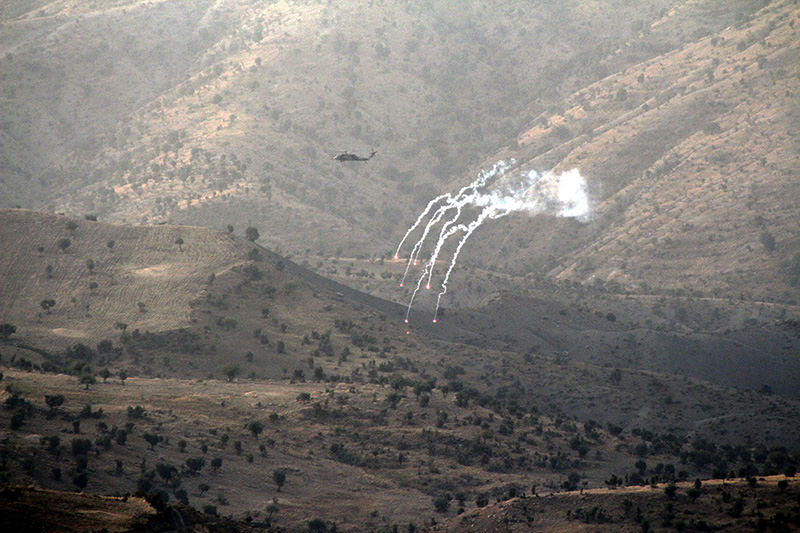 |DHA Photo
by Daily Sabah Sep 13, 2015 12:00 am
Two police officers were killed and five others wounded in a bomb-laden car attack by the PKK in the southeastern province of Şırak early on Sunday. After the explosion, the terrorists started firing on the police.

Two of the attackers were killed at the scene of the incident and four others were killed in operations after the attack took place on the Şırnak-Uludere highway. The wounded were taken to Şırnak State Hospital. An air-assisted operation was launched in the region to apprehend the remaining assailants.

Also on Sunday morning, a police officer was killed in a rocket launcher attack while refilling a ditch dug by the PKK in Diyarbakır's Sur district.

Furthermore, two PKK terrorists were killed in raids in two locations in Sur. Security units reportedly seized six automatic rifles and an RPG7 in the raids. A military post was also attacked with mortar shells in Şemdinli in Hakkari province. One PKK terrorist was caught by a military unit and two others surrendered.

Security officials seized an estimated 60 tons of explosives, ammunition and food in an operation into PKK shelters in the southeastern Bitlis province on Friday, officials said.

According to a statement released by the Bitlis governor's office, the ammunition and explosives were hidden in shelters ostensibly to be used in attacks on the Turkish military and civilians. The stash was destroyed at the scene after taking necessary safety measures, the statement said.

On Tuesday, 20 tons of ammonium nitrate, a chemical used in explosives, allegedly to be supplied to the PKK, was also seized in Mardin, southeastern Turkey by gendarmerie units.

The PKK, which is listed as a terrorist organization by Turkey, the U.S. EU, renewed its terrorist campaign against the Turkish state in the aftermath of the July 20 suicide bombing in Suruç which killed 34 people.
Last Update: Sep 13, 2015 7:10 pm
RELATED TOPICS