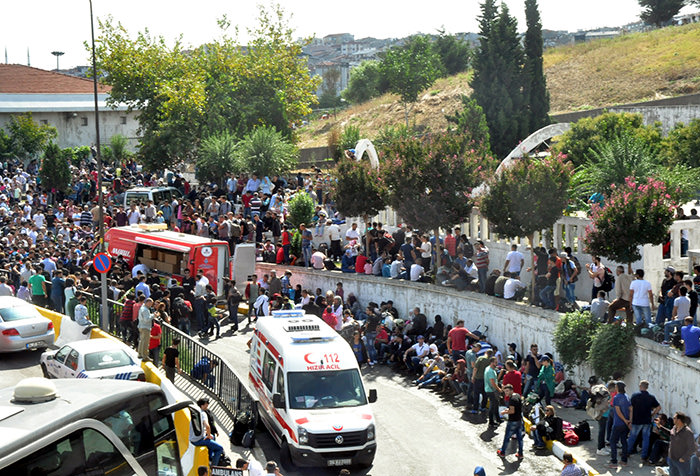 In scenes reminiscent of EU countries, Istanbul’s main bus station was swarmed with Syrian migrants yesterday who shared one goal: Reaching Germany by land. Hundreds waited to board buses to the Greek border with little hope as Turkey stepped up measures to stop illegal crossings

"Germany" was one of the words most heard among the crowd yesterday in an unlikely place: Grand Istanbul Bus Station, the main inter-city transportation hub of Turkey's largest city. Hundreds of Syrians from several Turkish cities flocked to the busy transportation hub with one thing in mind: getting to Germany by land.

The Syrian crisis continues to take its toll on migrants and European Union countries criticized for their inefficient approach to the crisis. A new trend emerged recently in plans of migrants to reach Europe. Daunted by often deadly sea journeys, Syrian migrants return to the land route they once avoided due to the high cost and distance.

Starting out from Istanbul, they plan to reach to Edirne, a northwestern province bordering Greece and Bulgaria and only 237 kilometers or roughly a two-and-a-half hour drive from Istanbul. From there, their ultimate destination is Germany in pursuit of a better life far from the conflict zone where death and destruction became ubiquitous.

Mingling with already large crowds of outgoing and incoming passengers swarming the concrete labyrinth of the station where hundreds of buses arrive and depart daily to every city in Turkey, Syrians waited for hours to board buses.

Buses were already crowded and to the chagrin of Syrians, bus companies refused to sell tickets to them. This is because of a ban on Syrians leaving the city they are resided in Turkey as a measure to stop them from traveling to cities bordering Europe. Such a ban is in effect in Edirne where gendarmerie troops stop every bus arriving in the city, checking the IDs of passengers and sending back Syrian refugees.

In the past five days, hundreds of refugees were intercepted before they entered the province. Syrians with residence permits in only one province are not allowed to travel to other provinces and gendarmerie troops setting up checkpoints at the entrances of the province order refugees from other provinces to go back. Yesterday, 250 Syrians attempted to walk to the Pazarkule border crossing between Turkey and Greece but security forces intercepted the group. Migrants had gotten off the buses before they entered the province upon hearing of the checkpoints and gathered at the main bus station in Edirne. Speaking to the media on behalf of the 250 migrants, Ahmed Mihdaki said they aimed to march to Germany from Greece. "We are not afraid. We have braved death and all kinds of challenges on our way here. We are grateful to the Turkish people for helping us, but we want them to allow us to cross the border," he said. Migrants covered some 30 kilometers, carrying heavy luggage and infants, to downtown Edirne. They have been waiting at the border of the province as the news went to print after Turkish troops stopped them. As they were marching to Edirne, migrants told reporters approaching them that they wanted to go to Germany. Aras Macicum was among those who had to get off the bus traveling from Istanbul to Edirne some 40 kilometers outside the border province due to the ban. Macicum told Anadolu Agency they were about to pass out due to fatigue and appealed to authorities to help them to reach Europe.

Istanbul Municipality handed out food to migrants in Istanbul bus station but many turned them down, saying they did not want food, and just wanted to go to Edirne. Speaking to Doğan News Agency, Hussein Aljumaa, a 19-year-old Syrian from Damascus, said he had been living in Istanbul for two years. "We bought tickets five days ago but the bus company canceled it. They told us of a ban for Syrians. We still want to go and will not give up until we reach Edirne," he said.

Seeing no chance of getting on the buses, dozens of migrants started walking to Edirne from Istanbul, through the TransEuropean Motorway or TEM, a major highway stretching between northern Turkey and the northwestern border with Europe. Occasionally resting on greenery on the roadside, migrants were still walking to Edirne as the news went to print.

It remains to be seen whether they will reach their destination but Edirne Governor Dursun Ali Şahin is determined to not to let them in. "We will not let them march to the border crossing," Şahin said, saying 4,000 migrants were intercepted on Monday night. Speaking to Anadolu Agency, Şahin said the increase in numbers of migrants was tied to announcements by Germany and United Kingdom to take in more refugees. "It has been a busy night and a busy week for us," Şahin said yesterday. "We captured about 7,000 refugees in one week and sent them back. Police and troops work around the clock and we will not let refugees march to the borders," Şahin said. Currently, there about 1,000 Syrian migrants in downtown Edirne. "They are tired and in a miserable state. They are organized through social media sites," Şahin says.

"This is a relatively new development. We had refugees before but their number was low. After Germany and other countries announced that they would take in more refugees, their numbers swelled. We have measures in place but I want to remind them that Edirne is not some place through which they can easily sneak to the other side of the border," the governor said.

Indeed, the surge in the number of migrants is tied to rumors circulating that Germany would take in 400,000 refugees by midnight.

Sehem Mustafa, one of the migrants, was among migrants bent on reaching Germany at all costs as some members of her family already reached Germany. "We have no choice. The life will be better if we can go to Germany. I appeal to Turkey to let us go," Mustafa told Anadolu Agency.

Mahmud Ali, one of the migrants, told Anadolu Agency he would join his relatives in Europe who saved money for an illegal crossing into Europe. "I was scared of drowning so I preferred going by land. I would try to go by sea if I didn't have children," he says.

The land route is still the safest choice for desperate migrants as more deaths on sea journeys were reported yesterday. Twenty-two migrants perished en route to Europe from Turkey and more than 200 were rescued by the Coast Guard after a small boat carrying hundreds sank off country's Aegean coast.

Though the nationalities of the migrants were not immediately known, it is likely they are mostly Syrians, whose dangerous journey by sea to the Greek islands due to the proximity of the Turkish coast often ends up deadly.

The migrants, whose bodies were found floating at sea off the coast of Bodrum, a vacation resort popular among both tourists and immigrants seeking to reach Europe, were traveling aboard a wooden sightseeing boat that was just 20 meters long. They were en route to the Greek island of Kos, which is located near Farmakonissi, another island near the site of another migrant tragedy on Sunday. Thirty-four people, including 15 babies and children, drowned when their wooden boat capsized off Farmakonissi.

Four children were among those who drowned yesterday off the Bodrum coast where Aylan Kurdi, a three-year-old Syrian refugee, was found washed ashore earlier this month. Images of Kurdi's lifeless body lying on the beach became a symbol of the refugees' plight and increased the public pressure on European countries to do more for refugees. The European Union is still debating how many refugees each country should take at most while eastern European countries continue their heavy-handed response to migrants amassed on their borders.

Europe was criticized by Turkish leaders after images of Aylan Kurdi led to an outpouring of emotion across the world. President Recep Tayyip Erdoğan claimed the Western world was guilty for the refugees' ordeal by not admitting refugees. Prime Minister Ahmet Davutoğlu has said in a speech that Kurdi's death should be a warning sign for everyone and criticized Europe's response to refugees, pointing to the reluctance to help migrants.

Turkey has spent more than $6 billion for Syrians it has hosted since the war broke out in its southern neighbor and hosts more than 1.9 million Syrians with the ability to host only a small fraction of them in refugee camps. Ankara, which defines Syrians in the country as guests, pursues a policy focused on a solution to the conflict in Syria and urges the international community to take a more active role in resolving the conflict rather than focusing only on helping migrants. Turkey is a proponent of a plan for setting up a safe zone in Syria where Syrians can live without fear of attacks and will not be frequently displaced. In the meantime, the country asks for more aid from the international community to take care of Syrians spread across 81 provinces who are largely dependent on aid.

A small amount of aid was pledged by the European Union on Monday. Inaugurating an aid project in Ankara, European Union officials announced 12.5 million euros in aid for "psycho-social support and education" of Syrian children and 5 million euros for monthly food aid to 41,000 Syrian refugees in three camps in Turkey. Bela Szombati, deputy head of the Delegation of the European Union to Turkey, said at the launch of the aid project that they were thankful to Turkey for giving temporary protection status to more than 2 million Syrians, giving them accommodation, health and education services. Szombati said that the European Union increased its support in the face of the deepening humanitarian crisis in Syria and activated a fund of 4 billion euros, adding that Turkey needed the international community's help to cope with the crisis.
Last Update: Sep 15, 2015 5:47 pm
RELATED TOPICS