NGOs call on Turkey to ease refugees' passage to Europe 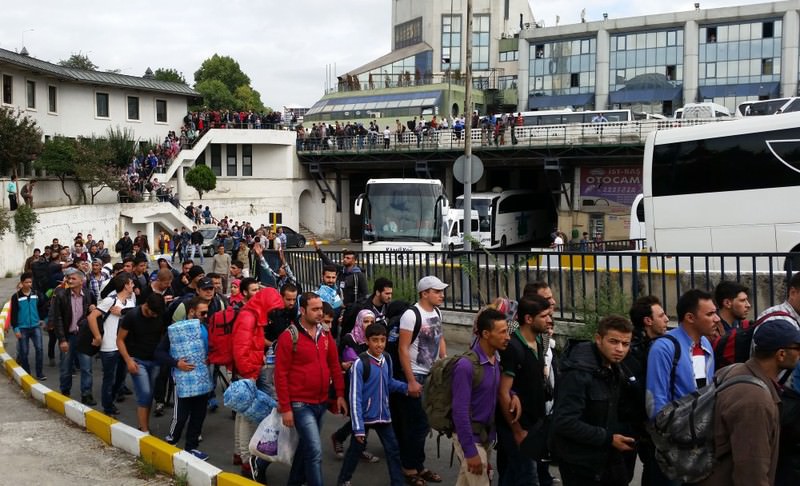 As human rights and aid groups called on Turkey to open its land border to Greece for refugees fleeing the Syrian crisis, Turkish officials announced their determination to keep the borders shut in accordance with bilatera

Aid groups and activists have called on the government to open the border to facilitate the passage of Syrian refugees to Europe, while unnamed officials rejected the proposal, arguing that Turkey's international responsibilities, along with its determination to provide shelter to the victims of the Syrian crisis, precluded such a decision.

The Humanitarian Relief Foundation (İHH) released a statement yesterday, calling on Turkey to open its borders to Greece and Bulgaria to prevent refugees from risking their lives trying to cross the Aegean Sea.

İHH General Secretary Yavuz Dede, speaking to Daily Sabah, said no matter how much Turkey spent on Syrians, it was not enough for them to build a future, noting that human beings would not want to live in container cities in perpetuity. He added, "Europe needs to cooperate with Turkey to ensure the safety of refugees, but still they left Turkey alone to cope with the crisis of our generation. They are still discussing which refugees to accept, discriminating based on religion and status."

He suggested that Turkey deciding to open its borders to Europe could facilitate EU countries to finally formulate a policy on the matter.

International Refugee Rights Association Chairman Uğur Yıldırım said the right to seek refuge is a universal right and Turkey had to grant this right to Syrians trying to reach Europe. "Land or sea are not the only options. Air travel could also be allowed. Moreover, there is a law that prevents countries in Europe to return those seeking refuge," he said.

He described the call on Turkey to open its borders a humanitarian message to prevent further deaths. "These people face not only death in the high seas but also may become victims of human traffickers, the organ mafia and many other criminal syndicates. Allowing access to European countries is a humanitarian necessity."

An official who did not want to divulge his name told Daily Sabah that the government had no intention of opening its borders and was committed to continue to shelter and provide for the millions of refugees who have fled to Turkey.

Meanwhile, concerning the social media rumor that Germany will accept 400,000 refugees, thousands of Syrian migrants from various provinces in Turkey continue to try to make their way to Greece to find safe passage to Germany. As the security of sea routes have been tightened to prevent illegal crossings and unfortunate deaths, the refugee population in the Aegean coastal city of İzmir, one of the main stops for refugees trying to get to Greece, has decreased considerably in the last week. Although hundreds of Syrians spend their nights in parks as well as the courtyard of Hatuniye Mosque in İzmir's Basmane district, officials said the number of Syrians in the area has dropped. Apparently, social media accounts that Syrian refugees use as guides to cross the Aegean Sea illegally are steering people to travel by land through Istanbul and the border city of Edirne to get to Greece and Bulgaria. Speaking to Anadolu Agency (AA), Savsen Atraş, the

administrator of one of the social media accounts for Syrian refugees, said a great number of refugees might flock to Turkey to cross European borders by land. "Syrians who want to cross the border via sea are now being collected by security forces and sent to refugee camps. It is not easy to use sea routes anymore. After all, most Syrians are afraid to get on boats due to the accidents," Atraş added.

Refugees that are directed to the Grand Istanbul Bus Station, the main inter-city transportation hub in the city, and Edirne, which has a land border with Greece, are trying to hold on with the help of the Turkish Red Crescent, AFAD, the İHH and local nongovernmental organizations (NGOs). More than 3,700 refugees, including small children, women and men, continue to wait in the courtyard of the Grand Istanbul Bus Station's mosque since bus companies are now allowed to sell them tickets to Edirne. Although only 200 refugees have been persuaded to leave the bus station and the mosque, thousands of them still continue to wait. The refugees try to spend the night in tents they have erected near the bus station, which has been surrounded by police forces for security purposes. As their hopes to board a bus to Edirne diminish, refugees find what little relief they can with the aid of the Turkish Red Crescent, which distributes water, chocolate and cakes.

Turkish Red Crescent Marmara Region Disaster Director Özcan Önem, who was present during the distribution of food aid, said: "Considering their needs at the moment, we distributed cake and water to the refugees. We have enough stock to help these people in the future. We came here with two teams that operate in shifts. Our aid will continue."

On the other hand, those who consider themselves lucky enough to reach Edirne – despite the Interior Ministry's instruction to bus companies to not transport Syrians to the city – still wait in areas near the highway to walk to the Greek border. Newcomers also join the first arrivals, as security forces do not let them into the city center.

According to refugee accounts, minibuses, busses and taxis transport them for a fee and drop them in Edirne or nearby places. Refugees are charged TL 100 ($33.33) each and dropped off before gendarmerie checkpoints.

Refugees say their only aim is to reach Germany and asked Turkey to allow them to cross the Greek or Bulgarian border. Ahmet Latif, one of the refugees, said they still have hope and shared his wish to reside in Germany one day. Emphasizing that they will not return to Istanbul even if they are not allowed to cross the border, Latif said, "We might die here, but we will not go back."

Occasionally, the refugee assembly area gets chaotic as rumors are spread that the government is allowing refugees to cross into Greece. The authorities said the wait would continue until the government allows refugees to cross the Greek border. Refugees are fighting extreme heat during the day, while enduring cold at night; however, prominent Turkish aid institutions try to help them as much as they can. AFAD, the Turkish Red Crescent and the İHH continue to distribute meal boxes and blankets.

While the gendarmerie tightens security around the area where refugees gather, many European and Arab press members are documenting the situation of the refugees.