Syrians want to make their voice heard in Edirne 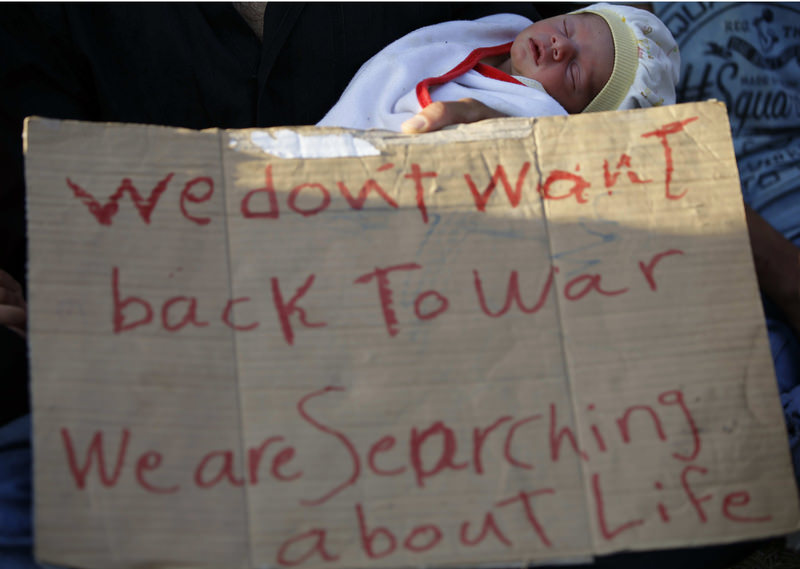 Refugees are camping outside Edirne want to start a new life away from wars and conflict. Some of the refugees announced that they have gone on a hunger strike.
by Anadolu Agency Sep 18, 2015 12:00 am

While hundreds of refugees camp in the border province of Edirne, government officials began visiting the city in order to tend to the concerns of the Syrian refugees. Following the recent developments, PM Davutoğlu is expected to visit Edirne and meet with representatives of the refugees

For the last four days, Syrian refugees in Edirne have been making an effort to have their voices heard by European countries. While some decided to go on a hunger strike to make their point, others wrote their wishes on signboards. As their actions continue to cause a stir in international media, government officials are paying visits to Edirne to lend an ear to the representatives of refugee groups.

Muhammed Murtaza Yetiş, chief adviser to Prime Minister Ahmet Davutoğlu, spoke to press members at the office of Edirne Governor Ali Şahin following the meeting held with the refugee representatives. He said they told refugee representatives during the meeting that refugees have finally made their voice heard around the world and expressed the importance of this development. "Prime Minister Ahmet Davutoğlu will meet up with the representatives of refugees in Edirne as well as the ones at Grand Istanbul Bus Station in order to make their voice heard," said Yetiş.

He said Turkey is doing and will continue to do everything it can for Syrians, from allowing them to cross the borders to providing them education and health services.

"However, we have to admit that the border policy of the West, especially, the European Union, is no longer sustainable. Actually, this is all the Syrians, who have been trying to make their voice heard in Edirne, are saying for the last few days," continued Yetiş. He said that Turkey understood Syrian refugees' general stance and statements about the European countries.

Chief Adviser Yetiş said Europe-based nongovernmental organizations have seen this conscientious stance of Syrians and call on their country's governments to go through their politics about the refugees. "Some of the countries and world leaders have given some messages concerning the issue; however, most of them did not go further than making a statement," added Yetiş.

Stressing that Turkey supports Syrian refugees both in Istanbul and Edirne, Yetiş said they will do everything in their power to help Syrian voices be heard by the world.

Yetiş claimed that the refugee issue can only be solved with the collaboration and agreement of all local actors, including countries and institutions, and said that Turkey has initiated certain projects to take concrete steps.

He also said that refugees are welcomed to stay in Edirne as long as they want and continued, "We did not convince them to leave Edirne. We are aware that their words are precious and they need to make their point in the eyes of the worlds public opinion. We are here to say that we will do our fair share of the work. The offices of the Edirne Governor Ali Şahin as well as the Edirne Municipality have been hosting our Syrian guests the best way they can since day one. There are two million Syrians in Turkey; hosting 2,000 Syrians in Edirne will not change a thing."

Upon receiving the question "What will be done if the refugees manage to reach the border?" Chief Adviser Yetiş answered, "They prefer land routes because of our efforts to stop illegal passages via sea routes. We have to take international diplomacy and law into consideration while securing the lives of the Syrians. Hence, we do not have the privilege to ignore impulsive behaviors. However, the refugees stated that they do not intend to walk to the border. We told them they can stay in Edirne if they want to make their point and The Republic of Turkey will support the refugees on every international platform."

Following the question of a press member about whether there will be an intervention if refugees want to walk to the Pazarkule border gate, Yetiş said, "There have never been and never will be a problem between Turkish and Syrian people. They said that they do not want to get to Edirne to cross the Greek border but to make their voice's heard at the last western border gate of Turkey. They asked to meet up with Prime Minister Davutoğlu. We told them that we pay great attention to them not only because of their demands but also from our respect to their stance."
RELATED TOPICS