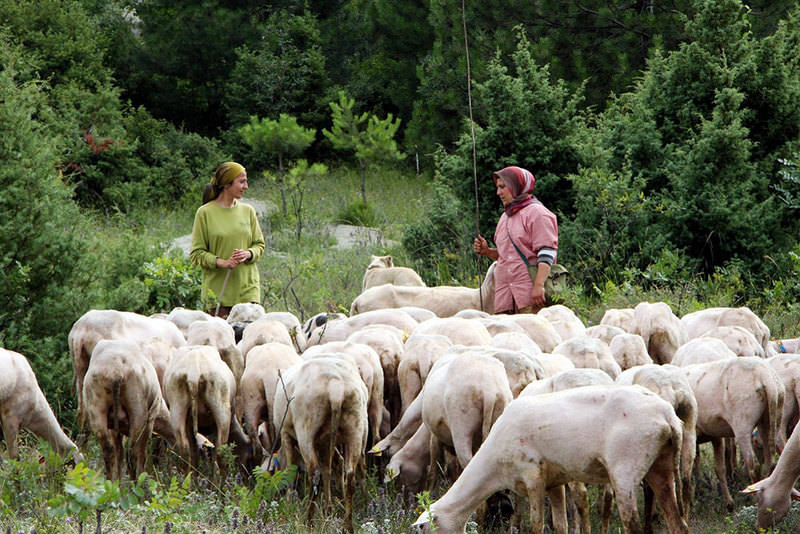 by Anadolu Agency Sep 19, 2015 12:00 am
The hustle and bustle of breeders and buyers, the shouts of bargaining, the shaking of hands and, of course, the overpowering smell of countless of cows and sheep...

A major Islamic holiday is coming up and Turkey's biggest city is now home to hundreds of thousands of animals from all over the country to be bought and sold.

Beginning from September 24, Muslims will celebrate the four-day Eid al-Adha, also known as the "Feast of the Sacrifice," which celebrates the Prophet Abraham's willingness to sacrifice his son for God.

It is the second of two religious holidays celebrated by Muslims and marks the last day of the Hajj for the faithful where millions of pilgrims pour into Mecca and Medina in Saudi Arabia.

Apparently, Eid al-Adha is not only a holy period for the Muslims, it is also the largest opportunity for the breeders during the year to do some business-and the livestock market in Istanbul's Bayrampaşa district is again jam-packed, despite price-hike claims.

Although a number of traders deny driving up prices, most of the sellers confirm that current prices are high compared to the last year's rates.

"Livestock prices were expected to remain the same as last year but increasing terror incidents, and the rise in animal feed prices have driven up the animals' cost," Yunus Coktin, a 60-year-old breeder, tells Anadolu Agency.

Coktin, a shepherd and dealer for nearly four decades, said that they started to celebrate Eid three weeks ago.

"Eid al-Adha always starts earlier for the dealers. I came to Istanbul from Erzurum [over 1,000 kilometers away] on August 20 and have sold 10 sheep and four cattle so far. But each customer complains about the prices," Coktin says.

According to Coktin, the kilogram price of livestock was 13-14 Turkish liras (around $4-5) in 2014 but it is up to 17-18 (approx. $5.5-6) liras this year. "But we should not skip the terror factor, as many people were not able to bring their animals to the big cities like Istanbul and Izmir," he says.

Husbandry is one of the main economic activities of Turkey's East and Southeastern Anatolia Regions.

However, following a suicide bomb attack in July blamed on ISIS in the southeastern province of Şanlıurfa that killed over 30 people, the PKK has renewed its armed campaign against Turkish forces, especially in southern and eastern provinces.

"People are afraid of traveling with their animals. So, the number of livestock has naturally decreased in big cities," Coktin says.

Supporting Coktin, 55-year-old dealer Mehmet Karadeniz says the rising prices are all about supply and demand.

"The demand for sacrificial animals in this Eid is more than the supply. Not only the terror but also the huge number of animals which could not pass health checks has affected the number.

"The prices are up because supply cannot meet the demand," Karadeniz adds.

According to the Turkish Agriculture and Livestock Ministry, almost five million head of livestock, including 1.2 million cattle and 3.8 million sheep and goats, are ready to be sacrificed.

According to one customer the sacrificial animal prices also vary from dealer to dealer considering the timing.

"For example, prices were more affordable in a livestock market which opened three weeks ago before the feast, but now they have nearly doubled."

According to Islamic customs, up to seven people can buy a share for cattle and camels. However, a sheep or a goat can only be sacrificed for one person.

"I have just chosen an animal; the dealer wants 6,500 liras (around $2,145) for it," Seymen says. "Actually, the price sounds reasonable but the only thing I know about the Eid al-Adha is that the haggling for the discounts never ends in livestock markets, even if the prices are down."

Stating that the price wars often overshadow good intentions, Seymen says that the main focus of Eid is "to share your food with needy people".

"If you want to help poor people and show your faith in God you have to buy sacrificial animal-whatever the price is," he adds.